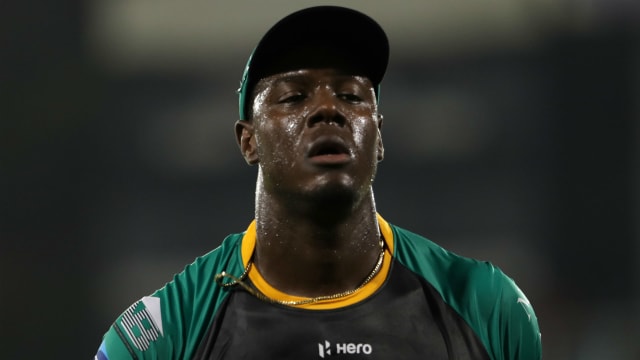 West Indies captain Carlos Brathwaite will accept any sanctions that come his way after holding up play to question incorrect no-ball calls during the third Twenty20 against Bangladesh.

However, on each occasion television replays showed the umpire had mistakenly penalised the bowler, with the second call seeing Bangladesh batsman Liton Das reprieved after chipping a catch to mid-off.

Both free-hits were hit for six and, after being informed of the errors by the dressing room, Brathwaite spoke to Tanvir and fellow on-field official Masudur Rahman before holding a conversation with match referee Jeff Crowe on the edge of the outfield, delaying proceedings for around eight minutes.

The tourists' skipper revealed after the game - which West Indies won by 50 runs to clinch a 2-1 series victory - how he had spoken to Crowe about the standard of officiating after the previous game, during which they had twice successfully overturned lbw decisions with the assistance of the review system.

Tanvir had also been on duty on Thursday, along with Gazi Sohel. All three T20 fixtures were officiated by umpires from Bangladesh.

"Sanctions may come and go, but if you don't stand for something, you fall for everything," Brathwaite told the media after the game.

"If the sanctions are to be handed, I would gladly take it. My team-mates need to be stood up for and as the captain of the ship, I will stand up for them.

"I went to the match referee after the second game. I didn't think the 50-50 decisions were going in our favour. Those decisions went for Bangladesh.

"I never ever want to accuse someone of cheating. I will stop short of that. They are professionals as well. I don't think they would go out there to be biased or, for lack of a better word, cheat.

"I didn't accuse them of cheating but I made my point clear to the match referee that every 50-50 decision in the ODI series and T20I series up to that point went against us.

"Traditionally, we haven't played the best cricket, whether red or white ball. But I found that every time I have been playing for the West Indies, the decisions have hampered us. It happened earlier in the fourth over, so a point needed to be made."

Keemo Paul was in fine form with the ball, taking 5/15, the best figures ever recorded by a West Indian bowler in T20Is

Brathwaite did praise Crowe for his patience while also insisting he had no intention of taking his team off the field at any stage.

"I must commend the match referee," he added. "After we had some stern words, it was resolved. We worked too hard for my team to walk off the field or forfeit the game or series.

"The decision was to stay on, fight on and finish the game."