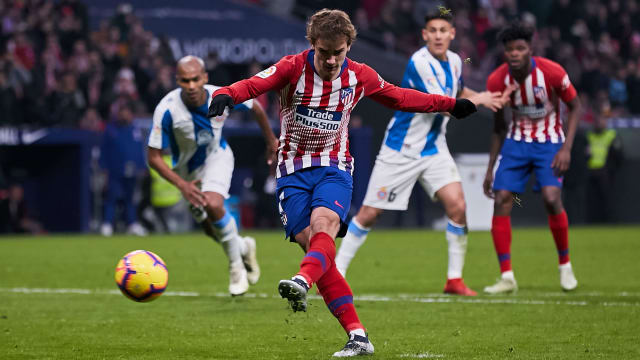 Antoine Griezmann's penalty was enough as Atletico Madrid moved up to second in LaLiga after claiming an unremarkable 1-0 win over Espanyol, as the Frenchman reached 200 career goals for club and country.

Espanyol produced a fine performance given their wretched form, but Atletico just about managed to earn the victory which moves them back above Sevilla at least until Sunday thanks to Griezmann.

The visitors looked considerably more threatening in the first half, with Jan Oblak having to be at his best to deny Borja Iglesias and one-time Atletico striker Leo Baptistao.

But Espanyol's attacking threat fizzled out somewhat after the break and Atletico made the most of that, with Griezmann's penalty proving decisive and inflicting a sixth successive league defeat on Espanyol, their worst run since 2003.

Espanyol looked the more creative of the two sides early on and went close twice in the first 15 minutes, as Esteban Granero sent a chip just wide of the top-left corner, before Oblak had to be alert to tip a similar effort from Iglesias over.

Oblak made another vital stop in the 28th minute when parrying Baptistao's fierce 20-yard volley, though he had to rely on his left-hand post to stop the Brazilian's follow-up effort.

The hosts looked more solid defensively after the interval and then found themselves ahead in the 56th minute, as Griezmann emphatically slammed a penalty into the roof of the net as a consequence of Koke being felled by a wild Granero kick.

Atletico should have rounded things off when Gelson Martins was tackled in the penalty area on the counter, though it had no impact on the score as the hosts held on at the other end.

What does it mean? Atletico ride their luck

Atletico were again guilty of producing an unimpressive performance, finding themselves under pressure a lot in the first half. Although they weathered the storm and came out unscathed, one has to assume their luck will run out eventually against better – more ruthless – opposition.

Oblak proves his worth, again

Having an immense goalkeeper really does make a difference, as Oblak showed on Saturday. Not only did he produce some vital saves, he dealt particularly well when put under physical pressure at set-pieces, somehow managing to routinely clear his lines despite being surrounded.

Croatian striker Nikola Kalinic was hoping to score in a third successive LaLiga game, but he offered very little before the interval, with Naldo generally bossing him. He was then replaced by Vitolo, who injected more urgency into Atletico's attack.

After the winter break, Atletico face a trip to fellow high-flyers Sevilla in what promises to be a feisty encounter at the Ramon Sanchez Pizjuan, while Espanyol host Leganes.