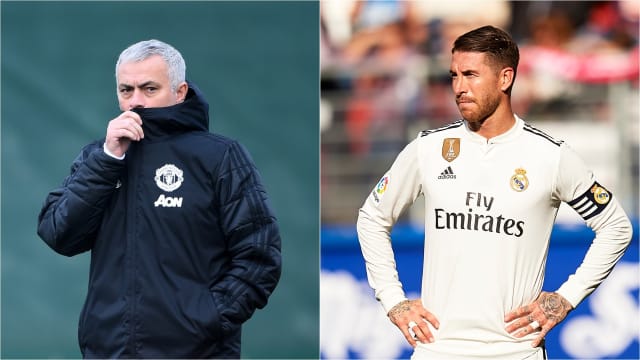 Sergio Ramos has called for respect to be shown towards Real Madrid head coach Santiago Solari amid talk of a possible return to the club for Jose Mourinho.

The Portuguese coach has been tipped to take over at the Santiago Bernabeu, where he spent three seasons in charge from 2010 to 2013, having been sacked as Manchester United manager.

Mourinho is thought to be the popular choice for president Florentino Perez to become a long-term successor to Solari, who was appointed initially on an interim basis after Julen Lopetegui was dismissed in October.

However, his often-confrontational man-management style led to schisms within the Madrid dressing room, prompting concerns that any return to the club could create a hostile atmosphere.

Ramos insists coaching decisions are not up to him but thinks Solari deserves more respect while he is in the job.

"I'm nobody to say who I want to be coaching. The captains don't have such a level of decision," he told a news conference ahead of Madrid's Club World Cup final clash with Al Ain.

"We've been without Mourinho here for five years and you're still talking about him! And we've won everything. Solari is here now and we must respect him."

This is how we rondo! #RMCWCpic.twitter.com/IJPI2eLfG7

Ramos also clarified his comments relating to Antonio Conte, who was heavily linked with replacing Lopetegui before Solari's appointment.

The Spain international had stated any new coach must accept that "respect is earned, not imposed" after he reportedly opposed plans to appoint the former Chelsea boss.

"What I said was that, in life and in general, you can't impose respect; you have to earn it. The same as any teacher in a class with their students," explained Ramos.

"Nobody would refuse to do anything. We have had all kinds of coaches. I don't have problems with what the coach wants.

"Madrid have had many types of coaches: some won more, some less. There are circles which start and end, and start again. Whichever coach arrives, however they work, I am the first to step up and do what I'm asked."

Ramos also denied suggestions of a poor team spirit among the Madrid players, after Cristiano Ronaldo, who left in a €112million deal in July, said his Juventus team-mates generated more of a family atmosphere.

"We didn't hear Cris speak at any point at Madrid. During his time here, the humility of the group was one of the keys to our success. We wish Cris all the best," Ramos added.