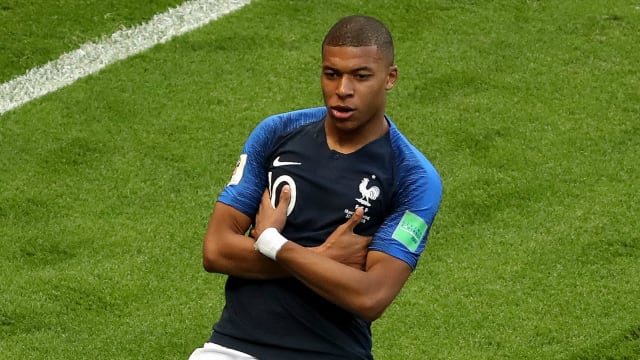 A World Cup, two Ligue 1 titles and the first ever Kopa Trophy - Kylian Mbappe marks his 20th birthday as the planet's most decorated young footballer.

The former Monaco striker has taken his game to new heights since joining Paris Saint-Germain for €180million, the second most expensive deal in football history.

Few players have won the game's greatest prize as a teenager but Mbappe did just that this year, scoring in the final as France triumphed 4-2 over Croatia at Russia 2018.

Mbappe's 20th birthday on Thursday means he can no longer be considered the most exciting teenager in the sport, but our assessment of his Opta numbers suggests there is even more to come.

63 - Mbappe has already scored 63 goals at club level in all competitions. The tally comes from 122 appearances, meaning he averages better than a goal every two games.

4 - In April 2017, Mbappe became the first player in the history of the competition to score in each of his first four knockout games in the Champions League.

10 - No Les Bleus player has reached 10 goals for France at a younger age than Mbappe, who found the net four times in his country's triumphant Russia 2018 campaign.

9 - Of those 10 goals for his country, nine were scored in 2018. That means Mbappe's calendar year at international level was the most prolific for a Frenchman since Thierry Henry hit 11 in 2003.

2 - In Mbappe's first season at Monaco, the 2015-16 campaign, he recorded more assists (two) than he scored goals (one) in his 14 appearances in all competitions.

26 - The following season, when Monaco beat PSG to the 2016-17 Ligue 1 title, remains Mbappe's most prolific to date. He hit 26 goals in 44 appearances, contributing a further 11 assists for Leonardo Jardim's champions.

15 - But Mbappe is on track to eclipse that figure in 2018-19, with PSG seemingly assured of another Ligue 1 crown. He has already hit 15 goals in 18 appearances in all competitions this term.

13 - Mbappe's goal for PSG against Red Star earlier this month means he is the youngest player to reach 13 goals in the Champions League.