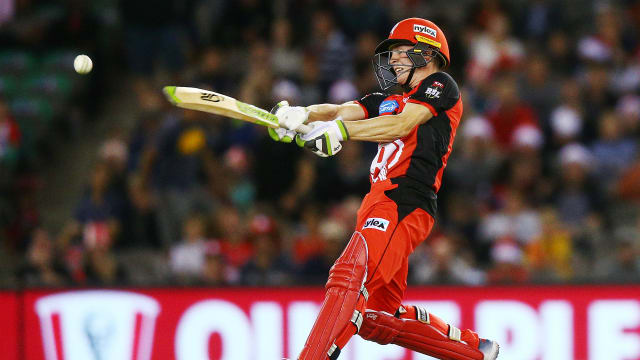 Even though the Renegades had failed to beat the Scorchers in eight previous attempts, it looked as though a routine win was on the cards as Kane Richardson (3-23), Daniel Christian (3-22), Jake Wildermuth (2-13) and Usman Shinwari (2-17) restricted the visitors to a measly 103 all out.

But a match that favoured the bowlers threatened to turn Perth's way when the Renegades were reeling on 17-4.

Harper and Nabi put on 68 for the fifth wicket to stem the tide and, despite the duo falling in the space of four balls late on, their stand put the Scorchers en route to a four-wicket win with 28 balls to spare.

It's been eight years in the making, but the @RenegadesBBL have FINALLY beaten the @ScorchersBBL!

The Scorchers possess plenty of bowling talent, with the likes of Nathan Coulter-Nile, Andrew Tye and David Willey among their ranks.

But it was a woeful performance with the bat. Michael Klinger top scored on 28 and only three other players reached double figures.

With three BBL titles to their name, though, the Scorchers will still be fancied to be in contention at the business end of the tournament.

Christian arrived in Melbourne on Wednesday, fresh from helping Jozi Stars to T20 glory in South Africa, to find his luggage had been unloaded in Perth, requiring him to make a quick dash to cricket gear provider Kookaburra.

But that annoyance clearly had no lingering effect as the Renegades debutant, a close-season signing from the Hobart Hurricanes, slid one through the gate to bowl Klinger before accounting for Ashton Turner and Ashton Agar - both caught trying to launch over midwicket - in the space of five balls.

Shinwari was equally impressive on his Renegades bow, starting the Scorchers' rot with one that cannoned into Sam Whiteman's leg stump and returning later to tempt Hilton Cartwright into a leading edge.

But while attempts at extravagance had proved their downfalls, Harper and Nabi played their way into their respective innings – the former scoring 36 off 25, while the latter equally impressed with 35 off 27.

Nabi eventually holed out to long-on, with Harper then run out following a mix up with Christian, but their hard work was not to be undone.