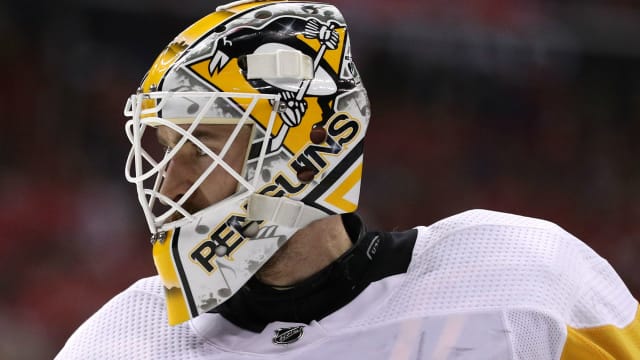 The NHL playoffs may not start for several months but you would not know that by watching the Capitals and Penguins play on Wednesday.

Pittsburgh topped Washington 2-1 behind goals from Sidney Crosby and Bryan Rust and a wonderful night from the defense as well as Matt Murray in net.

Matt Murray on the way back

The Penguins goalie's struggles have been widely documented this season. But he looks like he may be getting back to where he was when he was the lead man in net for Pittsburgh when they won the Stanley Cup.

Murray stopped 25 of 26 shots on Wednesday in his second game back from injury. He also got a lot of help from his defense, which made him look good.

Marcus Pettersson made an amazing save on a puck that was inches away from crossing the line and Pittsburgh's defense blocked shots all game. For the Penguins to be their best, Murray has to be as good as he can be and he might be getting back to that.

Retweet if you just gained a whole new appreciation for Marcus Pettersson. pic.twitter.com/4iu3lLN2mZ

While it may be tougher for a good defense to beat a good offense, the Penguins proved it can still be done, even when they were short-handed.

Washington came into the game with the fifth-ranked power-play offense in the NHL while Pittsburgh entered with the 10th-ranked penalty kill. It was the Penguins' kill that won the night on Wednesday, though.

Pittsburgh's kill stopped all four of the Capitals' power-play chances and even got a couple of opportunities while they were a man down.

The Penguins will be having nightmares about Tom Wilson for years, even if they topped the Capitals on Wednesday.

Wilson made his first appearance against Pittsburgh since the playoffs last season and immediately made an impact. He dropped defenseman Jamie Oleksiak in a fight less than a minute into the game.