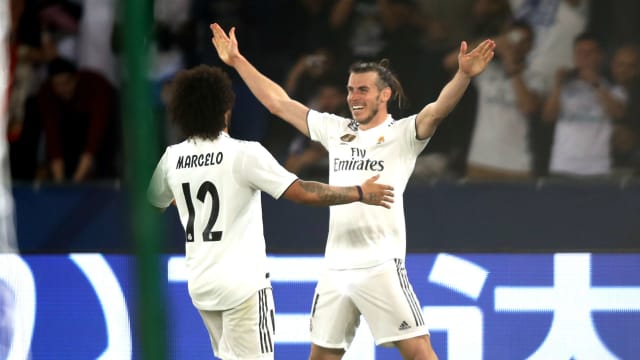 Madrid are looking to become the first club to win the tournament on four occasions, and Bale's superb treble ensured that dream remains a possibility as the AFC Champions League winners were swept aside.

Having seen an early chance go begging, Bale made no mistake in the 44th minute with a composed finish that flicked the inside of the post on its way in.

He extended Madrid's lead after a defensive mix-up before lashing home his third before the hour, helping Santiago Solari's team ease into this weekend's showpiece.

Kashima did start brightly, Serginho finding room in the Madrid defence to get in a second-minute shot that was tipped wide by Thibaut Courtois, with Gen Shoji glancing a free header wide from the resulting corner.

It took the European champions time to settle into a rhythm with Karim Benzema and Bale both wasteful, the latter failing to connect with a right-foot shot after neat build-up play.

Toni Kroos, Sergio Ramos and Benzema all threatened Kwoun Sun-tae's goal before Bale brought some quality to proceedings with a well-placed finish following a neat one-two with Marcelo on the edge of the Kashima penalty area.

Another marauding run down the left from Bale almost created a second goal five minutes after the restart, but Benzema's low shot was cleared off the line by Shuto Yamamoto.

Madrid were not to be denied soon after, however, as Bale doubled his tally with an opportunistic finish, the forward pouncing on a defensive mix-up between Yamamoto and Jung Seung-hyun.

He was celebrating a third goal just two minutes later as Kashima gave him far too much space, Bale lashing a left-footed shot across Kwoun from Marcelo's pass.

Solari withdrew the Welshman soon after and although Shoma Doi pulled one back for Kashima in the 78th minute, Madrid cruised into Saturday's clash with Al Ain at the Zayed Sports City Stadium.

What does it mean? Madrid a step closer to history

Having sealed their place in a fourth final, Madrid can move past fierce rivals Barcelona with four titles should they win go on to lift the trophy, which would be a welcome boost in a stuttering season.

Bale's love affair with the Club World Cup continued as he scored for the third different edition of the competition, a feat only previously achieved by Lionel Messi and former Madrid team-mate Cristiano Ronaldo. It was a fitting reward for an impressive display that also saw him become only the third player to score a hat-trick at the tournament - after Ronaldo and Luis Suarez.

3 - Gareth Bale is the third player in the FIFA Club World Cup history to score a hat-trick, after Cristiano Ronaldo and Luis Suárez. Dragon. pic.twitter.com/xaCLhLIEYy

Yamamoto goes from hero to villain

When he got a crucial block on Benzema's second-half effort, Yamamoto was rightly congratulated by his team-mates. However, moments later he had undone all his efforts in preventing his side from going 2-0 down. A poor pass led to Bale doubling the Spanish side's advantage, ending Kashima's dreams.

Madrid move on to Saturday's final with surprise package Al Ain, while Kashima will battle it out against River Plate to claim third place.