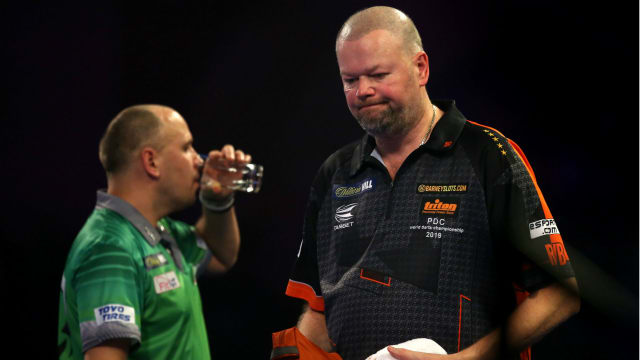 Raymond van Barneveld has described the "hurt" of suffering a shock defeat to Lithuania's Darius Labanauskas in his opening match of the PDC World Darts Championship.

The five-time world champion, who was crowned champion in 2007 having previously won the BDO equivalent on four occasions, was competing in his penultimate World Championship after announcing his intention to retire following next year's edition.

Van Barneveld - at least a quarter-finalist in each of the past four years - was beaten 3-2 at Alexandra Palace to suffer his first opening-round elimination since 2012.

"This is a very painful defeat, I really have no explanation for this performance and I can't tell you how much this defeat hurts," the Dutchman said.

"I’m not sure what happened because everything went right before this match. I felt really good before I got on the stage and was practising well but for some reason that changed when I got on stage.

"I don’t know if it was tension or what it was but I had enough chances and I didn’t take them.

"I should have won the third set and I didn't, so all of the confidence I had I started to lose."

Van Barneveld later took to Twitter to vow: "I will try what I can to come back next year."

I wish all the best to Darius Labanauskus for the rest of the tournament !! He deserved the win. He gave me chances but I couldn’t take them. I am lost for words at the moment. I will try what I can to come back next year.