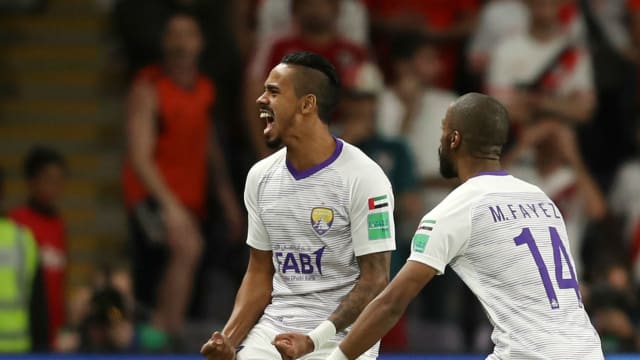 Al Ain caused a major upset at the Club World Cup on Tuesday as they dumped Copa Libertadores winners River Plate out on penalties in the semi-finals.

Nine days after they were crowned South American champions for a fourth time, River were unable to book a second Club World Cup final appearance as Enzo Perez missed the decisive spot kick after the match had finished 2-2 after 120 minutes.

Rafael Santos Borre had given River hope with a first-half double to cancel out Marcus Berg's scrappy opener, the Colombian's brace taking his tally to four goals in his last two outings.

After Caio had levelled proceedings, Borre twice went close to grabbing himself a hat-trick before Gonzalo Martinez saw a penalty hit the crossbar.

Perez also failed from 12 yards out in a dramatic shootout, allowing Al Ain to progress by a 5-4 scoreline after they converted all of their attempts from the spot.

Buoyed by their two earlier wins in the competition, Al Ain broke the deadlock in the third minute as Berg scrambled home a right-wing corner with the help of a deflection off Javier Pinola.

Their lead did not last long, though, as Borre levelled things up after Khalid Eisa had made a sensational double save to deny both Lucas Pratto and Exequiel Palacios.

Borre doubled his tally five minutes later with a composed finish after being released on the right by Martinez, the 23-year-old lifting the ball over Eisa's outstretched right leg.

Hussein El Shahat thought he had fired Al Ain level on the stroke of half-time only for VAR to rightly rule it out for offside, but Caio's low strike soon after the restart restored parity – the forward profiting from some slack River defending.

River were awarded a penalty in the 68th minute when Mohamed Ahmad was adjudged to have fouled Milton Casco, but Martinez could not take advantage as his spot kick thudded against the bar.

Franco Armani denied Ahmad with a point-blank save in the closing stages of extra time but it was Eisa who was the hero at the end, diving to his left to end a run of nine successful penalties.