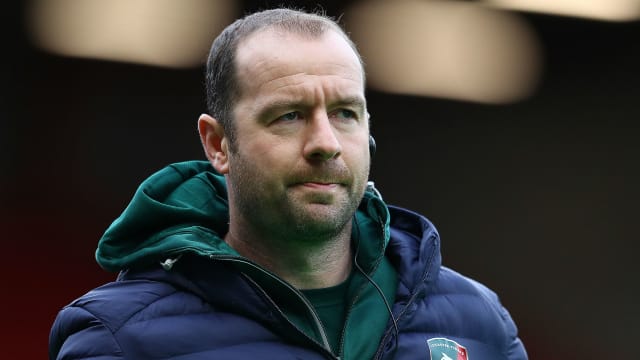 The former Ireland full-back stepped in as interim boss when Matt O'Connor was sacked after the opening match of the season.

Leicester - who have lost eight consecutive games - have put their faith in eight-time Premiership champion Murphy to steer the club out of troubled waters.

"It is a huge honour to be asked to be head coach at a club I know so well," said the 40-year-old, who scored 93 tries in 322 appearances for the Tigers during his illustrious playing career.

"This club means a lot to me, I’ve been here a long time and we all want to enjoy success with the Tigers.

"For me, performances on the field begin with the pride, passion and commitment you want to see from a Leicester Tigers team. It is about that passion for the shirt.

Geordan Murphy has been appointed head coach at Leicester Tigers after holding the position on an interim basis since the opening weeks of the season.

"A Leicester Tigers team is built around the beliefs of working hard for each other, everyone being a team player and also about having a real intent and integrity about what we do. These are base-level principles. That is what passion on the field looks like to me.

“Peter Tom [Tigers chairman] and the Tigers board have been very supportive of me. They've told me that whatever we need, they will support. The coaching team and the players have been very good since I was given the opportunity.

"We've had a challenging start to the season and we are working hard to improve performances and results, but this is also the start of a journey for this coaching team and playing group. There is a lot of quality there and we still have everything to play for this season.

"We are looking at how and what we can add to the coaching team in terms of experience and quality, and it has to be the right fit for the team.

"The supporters can play their part on that journey too and we hope they will be with us all the way."

Leicester are just three points better off than bottom side Newcastle Falcons in the Premiership and seem certain to miss out on the quarter-finals of the European Rugby Champions Cup.