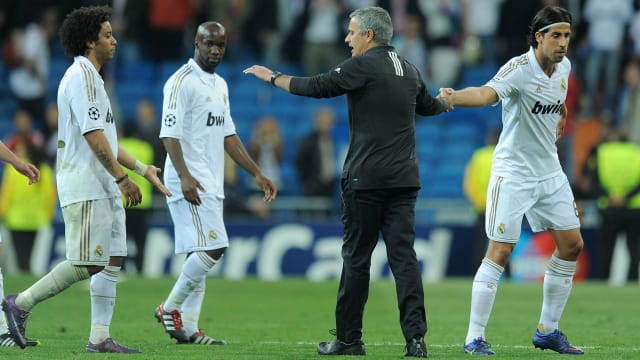 Marcelo thanked Jose Mourinho for the impact he had on his career while at Real Madrid and saluted the "great coach" following his sacking by Manchester United.

The Portuguese manager was dismissed by United on Tuesday following a dismal start to the 2018-19 season, which has seen the club fall 19 points behind Premier League pacesetters Liverpool.

Mourinho's last game charge was the 3-1 defeat to the Reds at Anfield on Sunday, as United produced a dire performance and hardly offered any attacking threat.

Recent speculation has suggested Mourinho could be lined up to take charge at Madrid at the end of the season, returning following his dismissal in 2013 after three years at the helm.

Although Marcelo thanked Mourinho for helping shape the left-back's career, he refused to be drawn on reports linking him with a return to the Santiago Bernabeu.

26 - Manchester United have picked up 26 points after their first 17 league games this season under Jose Mourinho; their worst points haul in the top-flight at this stage since 1990-91 (also 26 points). Dip. pic.twitter.com/I9iHo1uqVQ

"I'm here to talk about this competition, the Club World Cup," Marcelo told reporters at the pre-match news conference ahead of Madrid's meeting with Kashima Antlers.

"I know you're asking me why; he's a coach who has been at Madrid. It's a shame, because he's a great coach and he's without a club.

"If he returns to Madrid, I am not the one who decides these things. I thank Mourinho for what he did for me at Madrid."

One player who might be keen for another change of coach at Madrid is Isco, as the Spain international has struggled for minutes since Santiago Solari replaced Julen Lopetegui.

But Marcelo thinks the situation involving Isco has been blown out of proportion.

"We all know about his quality, maybe he's the one with the highest quality," Marcelo said. "We are giving a lot of importance to something that does not need it; some play more and others less, players have moments.

"He's at Real Madrid and he is Madrid to the death, like all the players."