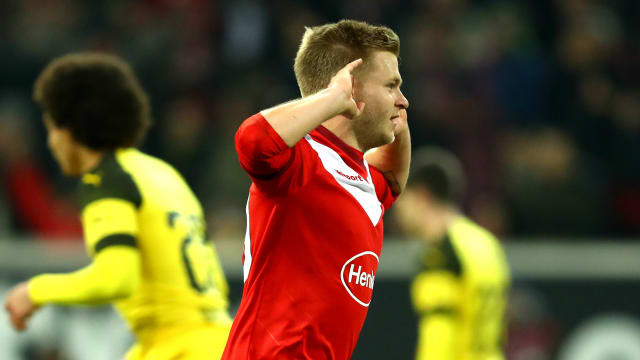 Borussia Dortmund's unbeaten Bundesliga start came to a grinding halt as Fortuna Dusseldorf livened up the title race with a 2-1 home win on Tuesday.

Dodi Lukebakio's cool first-half finish and a Jean Zimmer thunderbolt condemned leaders Dortmund to their first defeat of the season in the penultimate round of matches before the winter break.

The surprise result gifts reigning German champions Bayern Munich the chance to pull within six points of Lucien Favre's side when they host RB Leipzig in a crunch clash at Allianz Arena on Wednesday.

Dusseldorf climbed off the bottom with a weekend win over Freiburg and their confidence soared in the 22nd minute as Lukebakio exposed Dortmund's high line and tucked away the opener.

Takashi Usami squandered a good chance to double the margin before the break but made amends in the 56th minute, supplying the pass from which winger Zimmer sensationally picked out the top-left corner.

Favre introduced Jadon Sancho and Paco Alcacer off the bench on the hour and, though the latter halved the deficit by nodding in Lukasz Piszczek's cross nine minutes from the end, it proved merely a consolation for Dortmund.

Dortmund must now regroup ahead of Friday's important home meeting with second-placed Borussia Monchengladbach, who could close the gap to three points with victory.

5 – Dodi #Lukebakio has scored five of his seven #Bundesliga goals against Champions League participants (one goal vs Hoffenheim, three vs FC Bayern and now vs Dortmund). Threat. #F95BVB@f95pic.twitter.com/dOWO04Gacz