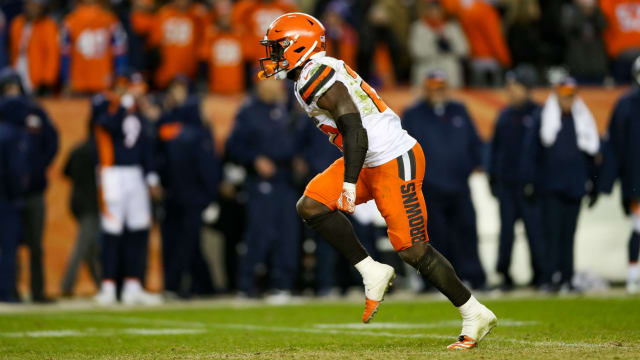 The Cleveland Browns had a surprise visit from Los Angeles Lakers icon Kobe Bryant at their team meeting and it appears to have given the team a boost, according to Jabrill Peppers.

Bryant visited the Browns on Friday before Cleveland upstaged the Denver Broncos 17-16 in NFL action on Saturday.

Second-year Browns safety Peppers had nothing but good things to say about the experience.

"It gave me that extra little oomph that I needed for prime time and I was definitely thankful for that,'' said Peppers, via Cleveland.com.

"That was probably one of the dopest moments since I've been in the league. It's just the way he can just command a room when he talks."

Peppers was a huge part of the win over the Broncos, as he recorded a game-clinching sack and an interception during critical moments of the matchup.

Cleveland have won four of their last six games and could actually make the playoffs, despite their horrendous start.

The Browns' chances are slim and depend quite a bit on the performances of other teams, but they have shown incredible improvement.

Cleveland have to win out to give themselves a shot, and they have a date with the Cincinnati Bengals on Sunday.

Former Browns coach Hue Jackson is now a special assistant for Cincinnati. While Peppers is thankful that Jackson was a part of the staff that drafted him in 2017, he looks forward to sweeping him this year.

"I knew he wasn't going to stay away from the game long," Peppers said. "I know how it looks, but he's the ultimate competitor. I have no ill-will towards him. I'm thankful for everything he taught me. Thankful that he brought me here —  but still looking forward to kicking his a** again."