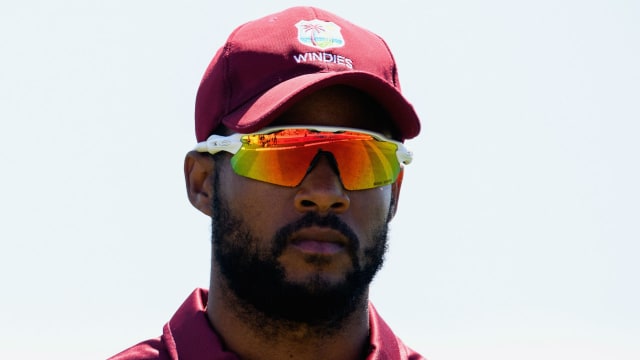 Shai Hope smashed the third-fastest fifty in international Twenty20 cricket as West Indies cruised to an eight-wicket victory in their series opener with Bangladesh on Monday.

After Sheldon Cottrell's 4-28 helped bowl Bangladesh out for 129 in Sylhet, the tourists surpassed their opponents' total inside 11 overs thanks mainly to opener Hope's explosive hitting.

The wicketkeeper-batsman hammered six sixes to reach his half-century from just 16 deliveries - only Yuvraj Singh (12) and Colin Munro (14) have managed the feat in fewer balls - before eventually falling to spinner Mahmudullah for 55.

Still, Hope's early onslaught - West Indies equalled the T20 record with 91 runs at the end of the six-over powerplay - secured a 1-0 lead in the three-match series.

Nicholas Pooran and Keemo Paul steered their team home with 55 balls to spare, finishing up unbeaten on 23 and 28 respectively with the latter hitting three sixes in his 14-ball cameo.

Shai Hope's record-breaking half-century wraps up an eight-wicket win in quick time for the @windiescricket.

They needed just 10.5 overs to overhaul a target of 130 in the first T20I. #BANvWI SCORECARD  https://t.co/K3JNFNwKgmpic.twitter.com/XYA4CRVStU

Cottrell had laid the foundations for victory with a hostile spell of bowling, the paceman's career-best figures in the format seeing Bangladesh dismissed in 19 overs after they had elected to bat first.

Captain Shakib Al Hasan top-scored with 61 but was one of only three home batsmen to reach double figures, Mahmudullah (12) and Ariful Haque (17) the others to do so.

Bangladesh simply never recovered from a disappointing powerplay, Cottrell claiming two of four wickets to fall in the first six overs before returning later in the innings to end Shakib's lone hand, the left-hander's weak pull shot providing the bowler with a simple return catch.

Paul also picked up 2-23 from his four overs before making a contribution with the bat, though Hope's incredible knock was the highlight in a comprehensive triumph.