Van Gerwen 'emotional' after drink was thrown over him 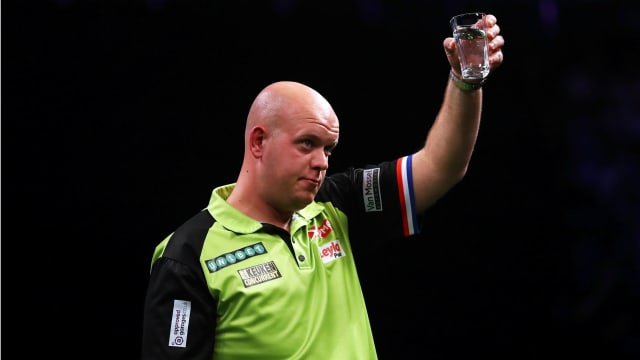 Michael van Gerwen admits he felt "a bit emotional" after he had a drink thrown over him at the PDC World Darts Championship.

The two-time champion was soaked as he prepared to walk to the stage at Alexandra Palace, prompting a delay to his tournament opener against Alan Tabern.

The guilty fan was removed from the venue and, after a quick change of shirt, Van Gerwen bounced back to win 3-1.

"I didn't really know how to react after the incident because nothing like this has ever happened to me before," Van Gerwen is quoted as saying on the PDC website.

"I got a bit emotional about it at the start but I recovered well and I can't really complain with how I played after that, and I had to be at my best because Alan played a phenomenal game.

"My section of the draw is tough and I will have to beat some great players to win this title but I know if I play well I will do it."

Van Gerwen later took to Twitter to say: "Sad that one silly person caused a problem for all good fans."

Thank you too all fans and for nice messages tonight, sad that one silly person cause a problem for all good fans, thank you to @OfficialPDC security for quick thinking , sorry to Alan for having to wait.