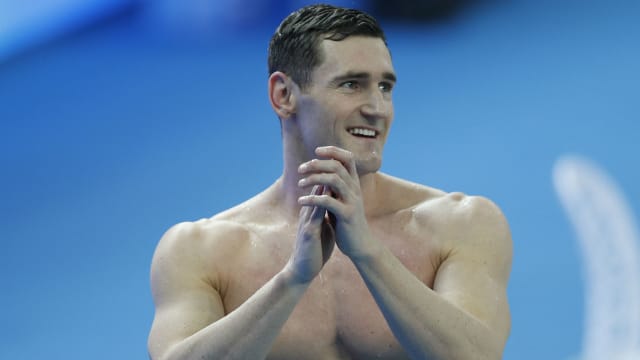 Cameron van der Burgh ended his glittering career on a high note by completing a breaststroke double on the final day of the Short-Course World Swimming Championships in Hangzhou.

The 30-year-old South African announced he will retire from competitive swimming after winning the 100-metre breaststroke title in a championship record time on Wednesday.

Van der Burgh signed off in style on Sunday, winning the 50m final and setting another championship record mark of 25.41 seconds, with Ilya Shymanovich and Felipe Lima taking silver and bronze respectively.

He is only the fourth swimmer to win the breaststroke title over both distances after retaining his crown in his last race.

Van der Burgh quits with an Olympic gold medal and six world titles among his long list of honours.

Typical of Cameron van der Burgh to say goodbye in such emphatic style! See all the action live on  https://t.co/bEozhdW5qV#FINAHangzhou2018pic.twitter.com/PGwcKoswWC

He said: "It is better to end my career now. 2018 has been an amazing year, getting married and becoming a Commonwealth champion and now a double world champion.

"It will be hard to beat this year. I am more than happy with the decision to retire. I have prepared for my next life and I have started that, so I am not sad at all. It is more than a happy ending. It is not every athlete that gets to ride into the sunset as a double world champion."

The United States topped the medals table with 36 - including one-twos in women's 200m breaststroke and 100m butterfly finals which were won by Annie Lazor and Kelsi Dahlia respectively.

They finished with 17 golds after winning all three relay finals, while Caeleb Dressel won the 100m freestyle final to end the week with five titles.

Russia's Evgeny Rylov, Ukraine's Mykhailo Romanchuk and Ranomi Kromowidjojo of the Netherlands were also crowned world champions on the last day of competition.