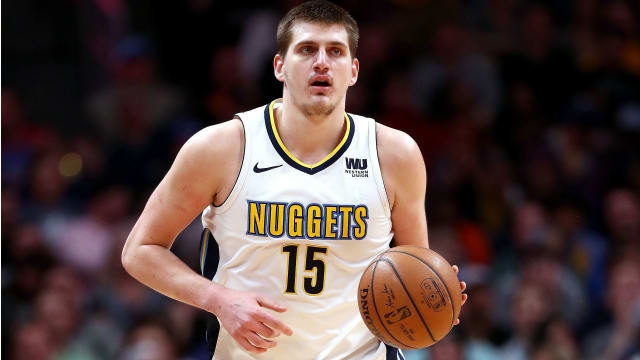 The Denver Nuggets trumped the Toronto Raptors 95-86 in the matchup of the NBA's conference leaders on Sunday.

Despite a roster ravaged by injuries, the Western Conference-leading Nuggets completed a season sweep of east pacesetters the Raptors, who were also missing key players.

The Nuggets (20-9) – without Will Barton, Gary Harris and Paul Millsap – trailed 70-57 in the third quarter before going on a 23-2 run to secure their 10th win in 12 games, maintaining a slim lead over the Golden State Warriors in the west.

Nikola Jokic had a team-high 26 points on 11-of-19 shooting. He also grabbed nine boards and dished out four assists.

Nuggets team-mate Jamal Murray was quiet for most of the game, but he came on strong when his number was called in the fourth quarter. He finished with 19 points.

The Raptors (23-9) – who were without Kyle Lowry, Pascal Siakam, Fred VanVleet and Jonas Valanciunas – were led by Kawhi Leonard's 29 points and 14 rebounds.

Nets stay hot thanks to Russell

D'Angelo Russell scored 32 points on 13-of-19 shooting to help the Brooklyn Nets pick up a 144-127 victory against the Atlanta Hawks, extending their winning streak to five games.

Ben Simmons did not record a single turnover en route to his 15th career triple-double in the Philadelphia 76ers' 128-105 win over the Cleveland Cavaliers. He had 22 points, 14 assists and 11 rebounds.

John Wall scored 40 points on 16-of-27 shooting and racked up 14 assists as the Washington Wizards beat the Los Angeles Lakers 128-110.

Rodney McGruder was held scoreless on 0-of-six shooting in the Miami Heat's 102-96 victory over the New Orleans Pelicans.

Jokic can do it all

Jokic showcased his exceptional playmaking ability with this no-look pass that led to a slam.

The Detroit Pistons have been up and down all season. The Pistons made a 4-0 start, but have dropped off considerably since then. Detroit have definitely felt the impact of multiple injuries, but they managed to beat the Boston Celtics 113-104 on Saturday. The Milwaukee Bucks have the second-best record in the Eastern Conference, but the duo of Blake Griffin and Andre Drummond in the middle may pose a serious threat to the Bucks.