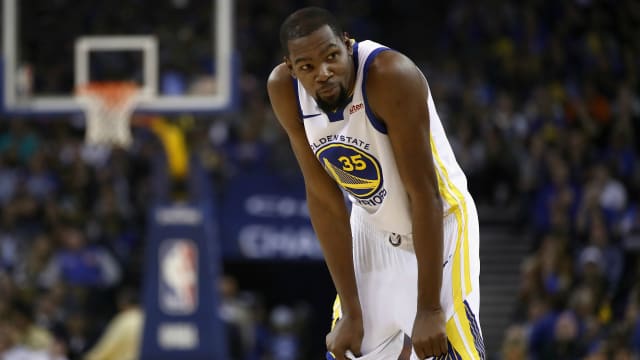 Kevin Durant warned the Golden State Warriors they cannot be so inconsistent or they will pay the price when the NBA playoffs come around.

The Warriors were cruising on the road against the Sacramento Kings on Friday, leading by 16 before a huge 26-point swing saw them trailing by 10 with three minutes to play.

A late rally followed, though they still trailed with 38 seconds to go before scoring seven unanswered points to claim a 130-125 victory, the narrow escape coming just two days after a morale-denting home defeat to the Toronto Raptors.

While Stephen Curry, Klay Thompson and Draymond Green all impressed against the Kings, Durant – who himself starred with 33 points, eight assists and eight rebounds – has had enough of up-and-down play, the Warriors (20-10) having been on a 9-9 run coming into the game.

"We have got to be better," he told NBC Sports Bay Area when asked for his feelings after the game.

"We weren’t disciplined, we were shooting shots just to shoot them, throwing passes just to pass them – no sense of urgency, no purpose.

yes hello we would like the lead back, thank you

But Durant did take encouragement from his side outscoring the Kings 17-2 down the stretch.

"[Steve Kerr was saying] just be solid, stay solid. We know this team plays fast so they're gonna make runs, but I thought we did a good job staying poised in the fourth.

"We made some great adjustments down on the defensive side of the ball and late in the fourth we just went and played. We were down 10, it's a pick-up game and you've got to get a bucket as fast as you can – we just tried to go and we got stops."

The Memphis Grizzlies are up next for the Warriors on home court on Monday, and Kerr knows there are improvements to be made.

The coach said: "We had several spurts in that second half where we sort of lost our composure and just couldn't get anything going. We knew we could get back in it if we were just poised and a little more patient offensively."

Curry had 35 points, six assists, seven rebounds and three steals, Thompson had 27 points and 9 rebounds, while 14 points and 10 rebounds gave Green a double-double.

Three @warriors combine for 95 PTS in the 130-125 comeback victory! #DubNation