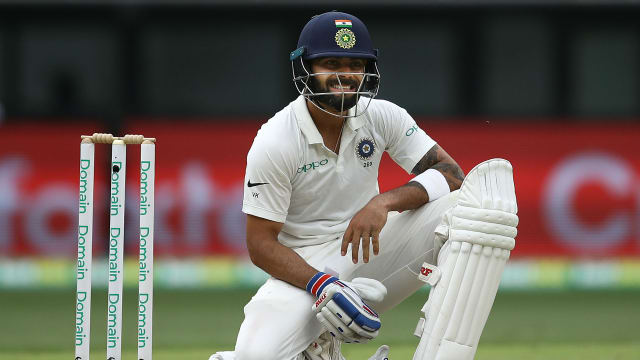 The presence of Virat Kohli at the crease has Ishant Sharma confident that India can seize control of the second Test against Australia on day three.

India captain Kohli ended the second day unbeaten on 82, leading the tourists to a solid position on 172-3 after they made an awful start - slumping to 8-2 after just 31 balls - in pursuit of Australia's 326.

While there is still work to be done when play resumes on Sunday, Ishant says the India dressing room will remain in high spirits as long as Kohli is out in the middle.

"Whenever [Kohli] is batting, we have to feel pretty confident," he told reporters. "We feel good, because we have finished the day in a strong position.

"Hopefully it can continue tomorrow [Sunday]. Right now, I can say it's equal. Hopefully we will win the first session [on Sunday] and turn the game in our favour."

Fantastic innings so far from Virat Kohli and great support from Rahane. Has been some great viewing for a Test Match Cricket lover. Grit, fight and exemplary courage #AUSvINDpic.twitter.com/hoVQ13dDvK

Cheteshwar Pujara supported his skipper with 24 off 103 balls - during a restorative partnership of 74 - before Ajinkya Rahane added 90 alongside Kohli and ended the day 51 not out.

Ishant credited Pujara for keeping the Australia attack at bay in trademark fashion, while heralding the importance of Rahane's knock after the hosts belatedly made a breakthrough.

"We know that when Pujara defends, the ball doesn't go past," Ishant said. "He is someone you need in your team. I have played against him and I know how difficult it is to bowl to Pujara.

"When he plays, he makes the bowlers really tired, it takes its toll. We know that if he stays on the wicket, he can do wonders for the team. It was very unfortunate the way he got out [caught down the leg side off Mitchell Starc]. We don't get those kind of wickets, bowled down the leg and caught behind.

"Then Ajinkya came in and played some pretty good shots to shift the momentum. We ended the day pretty well."