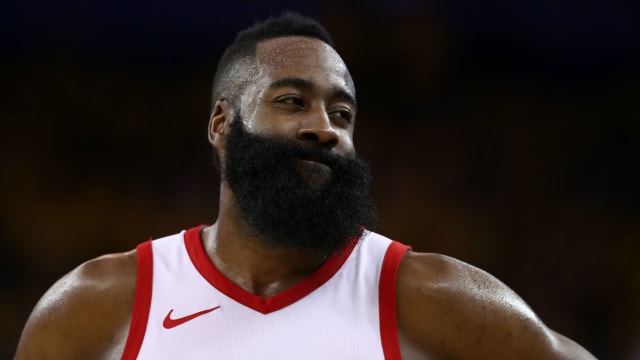 Chris Paul was left wide-eyed after James Harden delivered a masterclass to help the Houston Rockets beat the Los Angeles Lakers on Thursday.

Harden got the better of LeBron James, becoming the first player in NBA history to produce four triple-doubles with 50 points or more, as the Rockets recorded a much-needed 126-111 victory.

"I ain't never had a team-mate that's capable of doing that."

Rockets center Clint Capela felt Harden was in for a big night when he snarled and flexed both arms following his first basket - a departure from his usual cool demeanour.

"I was like, 'wow!'" said Capela. "I've never seen James like that, especially flexing after a dunk. Is that a new James in front of me or what? I've never seen him like that in five years. That was something - and it sent a message to everybody."

Harden himself hopes the win will enable the Rockets to kick on after an underwhelming start following last season's run to the Western Conference Finals.

"Me and Chris are the leaders. We have to go out there and play well and put ourselves in position every single night. That's what we have on the line."

James, who managed 29 points for the Lakers in a losing cause, lamented his side's ill-discipline that allowed Harden 18 points from the free-throw line.

"You can't put him on the line," said James.

"We put him on the line 20 times. He's already talented as s*** offensively, can put the ball in the hole multiple ways - drive, step-back threes. But you give him easy points...

"When you put a guy like that on the line, you can't put [Kevin Durant] on the line for 20 free throws.

"You can't put any of our scorers that we have in our league on the line 20 times because they just see the ball go in the hole."