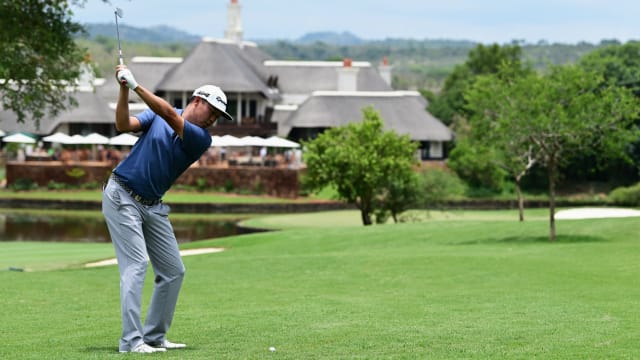 David Lipsky moved into a one-shot lead at the halfway mark of the Alfred Dunhill Championship in Malelane on Friday.

A bogey-free six-under 66 ensured the American is the man to catch at Leopard Creek Country Club.

It is four years since Lipsky claimed his only European Tour title at the European Masters, but an eagle three at the 13th and four birdies put him at the top of the leaderboard on eight under.

Back-to-back birdies at the second and third put Lipsky - who started on the back nine - two shots clear and his advantage was increased by another stroke when Scott Jamieson bogeyed the second.

Jamieson held a share of the lead after hitting the turn in 32 following five birdies in six holes, but a six at the second pegged him back.

The Scot made another couple of birdies to sign for a 66 of his own, which leaves him in a share of second place with compatriot Marc Warren.

Warren - who had to go through Qualifying School to regain his card last month - put himself in strong contention with a five-under 67, two late bogeys denying him the lead.

Another two Scotsmen are a further shot back, Doug McGuigan and David Drysdale carding rounds of 66 and 69 respectively to go six under.

McGuigan conjured up the lowest nine holes of the season to surge up the leaderboard, completing the back nine in 30 with seven birdies.

Oliver Bekker - leader after the first round - and defending champion Brandon Stone are among four South Africans well poised on five under along with Oliver Wilson and Dimitrios Papadatos.