Muller apologises to Tagliafico for kick to the head 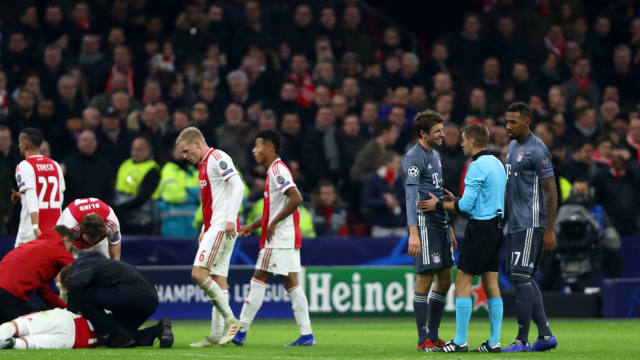 Thomas Muller has apologised for the high challenge on Ajax defender Nicolas Tagliafico which resulted in the Bayern Munich star being sent off in Wednesday's 3-3 Champions League draw.

Muller was given his marching orders in the 75th minute after accidentally scraping his studs on Tagliafico's head when trying to control a high cross-field pass.

The Argentina international suffered a cut but no serious lasting damage and was able to complete the match – later scoring a last-gasp equaliser.

Muller's dismissal was the catalyst for a thrilling conclusion to the contest, as Dusan Tadic, Robert Lewandowski, Kingsley Coman and Tagliafico all found the net from the 82nd minute onwards.

But it was the red card which spawned the most debate and Muller was apologetic on Thursday.

"I would like to apologise to Nico Tagliafico for yesterday's incident," Muller wrote on Twitter. "There was no intention [in the foul]. Get well."

Bayern and Ajax qualified for the knockout phase, with Niko Kovac's side finishing top of Group E.