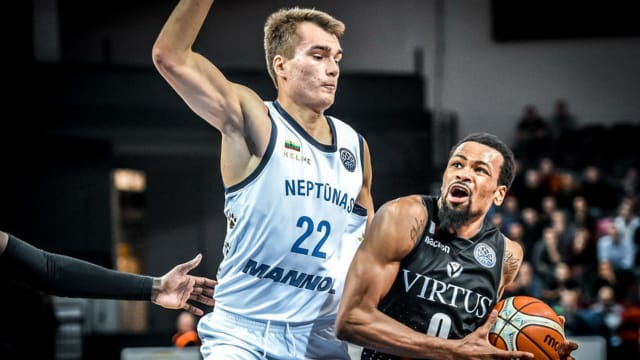 The last perfect record in this season's Basketball Champions League was ended on Wednesday as Segafredo Virtus Bologna's winning start was halted.

Bologna fell to 7-1 as they were handed a first defeat of the campaign by Neptunas Klaipeda after a dismal fourth quarter in an 88-85 defeat in Lithuania.

Neptunas trailed by five points through 36 minutes but unleashed a run of three-pointers late on - with Tomas Delininkaitis scoring six from eight - to turn the early game on its head.

Group A outfit Sidigas Avellino (5-3) also endured a night to forget as they slipped to back-to-back defeats, going down 92-71 in a humbling home reverse to Nizhny Novgorod.

Avellino's place in the next round is still far from assured, but UCAM Murcia (7-1) have some breathing space at the top of the pool after winning 80-71 at Le Mans.

Anwil boosted their hopes by beating Ventspils, while Banvit saw off MHP Riesen Ludwigsburg in Germany.

PAOK drew level with Umana Reyer Venezia in Group B after scraping past the Italian side 77-76 at home.

The hosts trailed by a point with just seconds remaining, but Phil Goss – who had 20 points and five rebounds – made a pair of free throws to clinch a dramatic victory.

The and Thessaloniki team gets their fifth straight win in the #BasketballCL!

Fribourg Olympic upset UNET Holon to secure their second win, as Nanterre 92 scored big in a 110-64 domination of Opava.