We rallied around it - Durant on Green confrontation aftermath 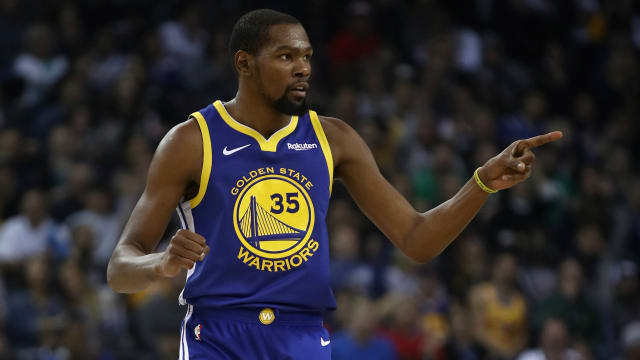 Kevin Durant immersed himself in basketball to help him get through the aftermath of his confrontation with Golden State Warriors team-mate Draymond Green.

Durant and Green argued on court at the end of regulation in their overtime loss to the Los Angeles Clippers last month, the former complaining that his team-mate had not passed the during a key play.

The argument continued into the locker room and became the talk of the NBA, with Durant bluntly telling reporters not to ask him about it anymore after days of probing and a suspension for Green.

While the questions stopped, the conversations about the confrontation did not and Durant has revealed he sought advice to get him through the difficult period.

"I just try to stay focused on ball and lose myself in the game," Durant told The Athletic.

"There were times where I don't shoot the ball well, times where the game doesn't go my way, but I try to get lost in the game to get through a time like that.

"Adversity happens everywhere, happens to teams, and we rallied around it. It happens, and you lean on your love for the game.

"Over the course of the year, sometimes it's tough to go to practice, tough stretches on long road trips. You run into obstacles and you just get through it."

He added: "People I lean on told me to stay centrefield with my thoughts and my feelings.

"I received so many people reaching out; my former coaches saying to stay centred, stay measured, stay pushing forward and keeping my foot on the gas.

"At that time, we were losing games, and people were banged up, so it's easy to go the other way when you're searching for answers. It was about staying positive and going to work."