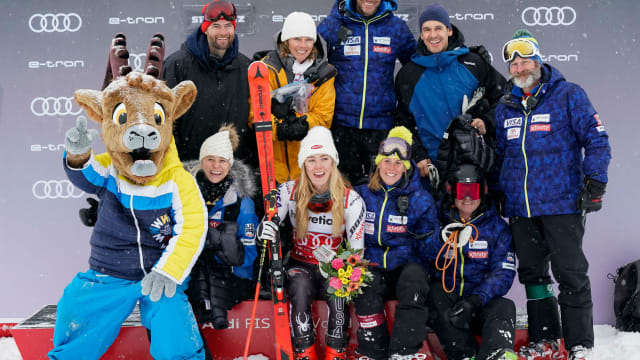 Mikaela Shiffrin continued her parallel slalom domination as she completed a clean sweep in St Moritz to move her onto 48 FIS Alpine World Cup wins.

Shiffrin moved into fourth on the all-time wins list with her super-G victory on Saturday, and she made it two from two in Switzerland 24 hours later – although she had to recover from an early mistake.

The 23-year-old American looked to have given Petra Vlhova an advantage in the big final but she stormed back to take the win, her fourth win in as many appearances in the discipline.

For Shiffrin – who is challenging for all crystal globes this season – the addition of the head-to-head slalom races brings extra preparation work, but while the wins keep coming she is more than happy to take part.

"It was a big fight, but that's what makes it exciting," Shiffrin told a media conference.

Get out the broom, folks - because that's a gold medal sweep for @MikaelaShiffrin at @stmoritz_ch!!‼️ WOW. #worldcupstmoritzhttps://t.co/AIDpcwY0TM

"For people who watch and for us, the athletes, that's a special thing about the event... it's really cool.

"I like [parallel slalom] a lot actually. It's so different from everything else.

"It makes the schedule a little bit tougher when I'm trying to do every event, and especially with yesterday [qualifying] and the super-G, I have never had a series of races in one weekend that was so different.

"So that was a big challenge to refocus for today. But it worked, so I can't complain."

Shiffrin has won five of the nine World Cup races this season and tops the overall standings by 393 points from Michelle Gisin.