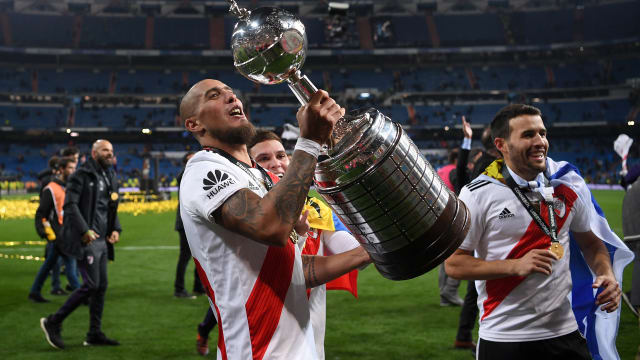 River Plate defender Jonatan Maidana is eyeing a meeting with Real Madrid after his team's Copa Libertadores success on Sunday.

That sent Marcelo Gallardo's men to the United Arab Emirates for the Club World Cup, where they will face ES Tunis, Al Ain or Team Wellington before a potential meeting with European champions Madrid.

Maidana said River were targeting a clash against the LaLiga giants later this month.

"Now we go for Real Madrid, our next goal," the defender said, via TyC Sports.

"We won a fair final, now to celebrate the achievement."

River had to come from behind in the second leg, Lucas Pratto cancelling out Dario Benedetto's opener to force extra time.

Wilmar Barrios' red card turned the game in River's favour and they made the most of their numerical advantage, goals from Juan Quintero and Gonzalo Martinez securing their win.

"A lot of the match was very even," Maidana said. "After the equaliser we managed well and we could win it.

"In the second half we improved, because in the first we made a big mistake. We talked at half-time and we tried not to miss so many passes and we achieved [our goal], because we dominated the game."