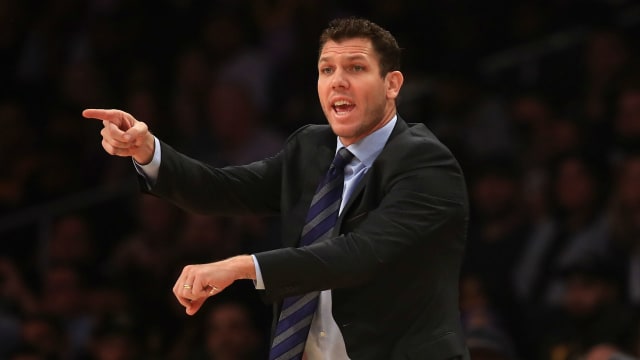 Luke Walton feels the Los Angeles Lakers are still lacking mental toughness after they "gave in a little bit" in a fourth-quarter collapse to the San Antonio Spurs.

And while head coach Walton played down the idea Los Angeles might have tired late on, he acknowledged there is a fragility to his young side.

"I thought our guys were alright," he told reporters. "Road games are much tougher when you're playing as many young guys as we are. We missed having [Rajon] Rondo and Brandon [Ingram], even though Brandon's very young.

"LeBron [James] came out, we took him out at the end of the second to try to get him a couple of minutes leading into half-time. We had a big lead but they cut into that right away.

"We got away from what we were doing really well up to that point.

Lakers can't keep up with San Antonio's hot shooting down the stretch and fall to the Spurs, 120-133. pic.twitter.com/1tJEodVbXR

"We're young and we're a new group together, we're still learning to play together. You get in these environments, San Antonio, and their crowd gets going, we're down bodies...

"As a group, we're trying to become a team that's mentally tough enough to win these type of road games. We've got a lot better from the start of the season, but we're not there yet. We can win these games, but we're not going to win all of them.

"I thought the way they [the Spurs] were shooting the ball and the run they went on, we gave in a little bit."

Star forward James (35 points, 11 assists, eight rebounds) now wants the Lakers to learn from this defeat as they face the Memphis Grizzlies on Saturday.

"We've got another one to play tomorrow [Saturday], versus a very good Memphis team that won tonight on the road," he said. "They're playing extremely well.

"We let this one get away from us, but it's a 48-minute game, it happens. We need to learn from it and we've got to get ready to go."

A downbeat James appeared to be disappointed with the officials' role in the game and refused to discuss the disparity in free throws awarded between the two teams (33-21 in the Spurs' favour), instead simply shrugging.