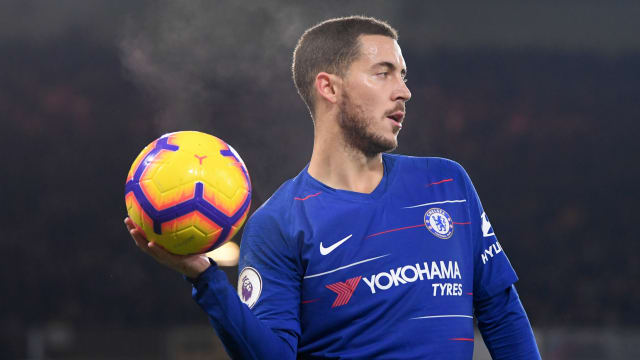 Pep Guardiola says a Manchester City move for Eden Hazard will not happen after the Chelsea star claimed he could improve the Premier League leaders.

Hazard has been among the top players in the Premier League this season and is yet to agree an extension to a Chelsea contract that expires in 2020.

The Belgium forward faces City at Stamford Bridge on Saturday with the Blues 10 points behind last season's runaway title winners but suggested he would boost Guardiola's options.

"It's true they don't have an Eden Hazard," he said to Play Sports. "That is the difference."

Despite an injury to striker Sergio Aguero, City's attacking ranks are well-stocked and Guardiola rejected a suggestion Hazard could be a transfer target for the champions.

"That is not going to happen. No," he told reporters.

"Switch on the TV, look at him, immediately you realise his qualities. You [the media] know his qualities better than me. He's an exceptional player. One, by far, one of the best players in the world."

We've enjoyed our trips to the capital of late! #CHEMCI #mancitypic.twitter.com/o9LGYDk9r0

At Stamford Bridge City will also face Jorginho, a player they reportedly tried to sign before the Italy midfielder opted to follow Maurizio Sarri from Napoli to Stamford Bridge.

Jorginho would have offered an alternative option to Fernandinho in City's midfield but Guardiola is more than happy with the contribution of the 33-year-old Brazilian.

"For me it's uncomfortable to speak about a player of another club. We know the history, we spoke about that before the Community Shield," Guardiola said of Jorginho. "He decided to go there, I'm not going to say it's a bad decision. He knows the manager, he knows the club.

"Chelsea's an exceptional club, he decided that, all the best. He didn't come to compete with Dinho, to be part of our team. What he has done, Fernandinho, not just this season all the years we have been together, is incredible. It's really incredible.

"People speak with many players and I understand that but most of the good things we have in that moment is thanks to that guy. I'm very pleased for him and I'm pretty sure from his commitment, his personality, his many, many, things, he's going to continue in that way.