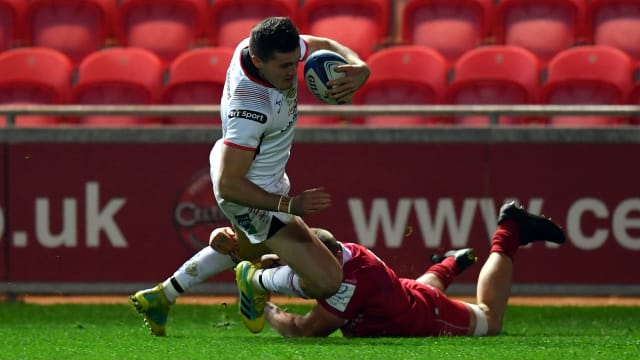 Scarlets' run to last season's European Champions Cup semi-finals will feel like a distant memory after they fell to a third consecutive defeat in this year's competition.

The Welsh region lost out to eventual champions Leinster in the last four in 2017-18 but are without a win in Pool 4 this time around after they were beaten 25-24 by Ulster in a thrilling Pool Four encounter at Parc y Scarlets.

Steff Evans scored two tries for the home side but the Irish province held on for a bonus point win that breathes new life into their campaign, with Jacob Stockdale, Henry Speight, Will Addison and Marcell Coetzee all going over.

The result pulls Ulster level points with Racing 92 at the summit, ahead of the French club's clash with Leicester Tigers on Sunday.

"We only have ourselves to blame," Scarlets coach Wayne Pivac told BBC Radio Wales. "This is a low point... but it's not over, there are three games to go and we've got to keep building on our performances."

Having weathered a Welsh storm, who was the star man for you? #ChampionsCuppic.twitter.com/gIATUN876l

In the day's other fixture, Edinburgh climbed above Newcastle Falcons to the top of Pool Five.

The visitors were 13-10 up at half-time at Murrayfield, but 21 unanswered points from the home side powered them to a 31-13 bonus-point victory.

Newcastle will drop to third if Montpellier can win at bottom side Toulon on Saturday.