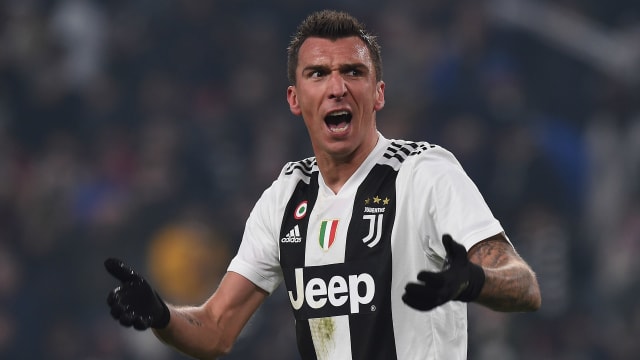 Mario Mandzukic's second-half header earned Juventus a 1-0 win over Inter in Friday's Derby d'Italia, strengthening the Serie A champions' grip on top spot in the table.

The Nerazzurri had the chance to exert pressure on the runaway leaders at Allianz Stadium but could not break down Juve as they moved 11 points clear of second-placed Napoli, who host Frosinone on Saturday.

Roberto Gagliardini had the best chance of breaking the deadlock for the visitors in a tactical battle of a first half but the Italy midfielder struck the post when he found a rare pocket of space in the Juventus box.

And when Joao Cancelo picked out Mandzukic at the back post with a floated left-wing cross, the striker nodded home to ensure Juve equalled PSG's record of 43 points as the best ever start in any of Europe's top five leagues after 15 games of a season.

Juve started on the front foot with Paulo Dybala heading Cristiano Ronaldo's cross wide but Sime Vrsaljko saw a long-range drive saved at the other end, where Inter hit the post in the 29th minute.

Matteo Politano cut inside off the right wing to feed Mauro Icardi, with the striker laying off a pass to Gagliardini, whose low shot beat Wojciech Szczesny but not the woodwork.

Marcelo Brozovic's excellent block denied Rodrigo Bentancur as Juve cranked up the pressure, Giorgio Chiellini forcing a great save from Samir Handanovic at the resulting corner.

Both sides were struggling to produce their best football, the surprisingly ineffective Ronaldo thumping over a 20-yard strike after Blaise Matuidi seized on a loose Inter pass.

But Mandzukic came up with the winner in the 66th minute, getting the better of former Juve man Kwadwo Asamoah when he arrived at the back post to head in Cancelo's perfect delivery.

Inter substitute Lautaro Martinez fired two efforts wide as Inter threatened to level, but Juve held on to record a fifth straight clean sheet in all competitions, their march to another title taking another big step.

What does it mean? Inter lack cutting edge

Although Inter played the better football for much of Friday's clash, they needed to show more decisive finishing with their chances not falling to captain Mauro Icardi. Juve were far from their best but recording a fifth straight league win showed they can grind out victories when needed.

In a Juve side boasting Dybala and Ronaldo, few would have pegged full-back Cancelo as a match-winner, but he provided the major moment of quality in a poor match. Cancelo reached the byline but wisely turned on to his stronger right foot to pick out Mandzukic for an easy finish.

Among the best penalty-box strikers in Europe, the main criticism of Icardi is that he does not offer enough in open play when opportunities do not come his way. The Argentina attacker has scored eight goals against the Bianconeri but did not have a sniff of adding to that tally in a muted display.

The final round of the Champions League group stage sees both teams in action, with Inter needing to better Tottenham's result when they host PSV on Tuesday. Juventus, already through, head to Young Boys a day later needing a win to guarantee first place in Group H.