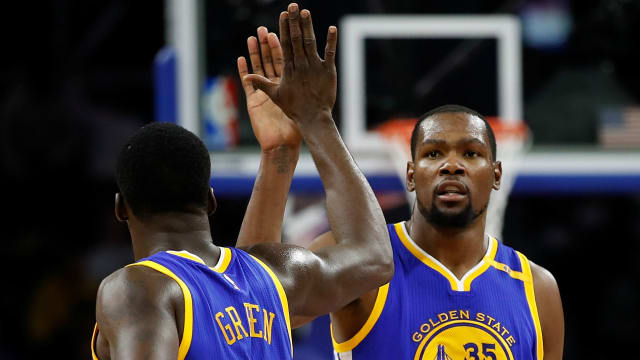 Green and Durant were involved in a verbal altercation during a Golden State loss to the Los Angeles Clippers in mid-November and their verbal exchange reportedly continued in the locker room after the game.

The team then suspended Green for a matchup with the Atlanta Hawks one day after the argument.

But, Myers said on Wednesday the Warriors have moved on from the incident during an interview with Bay Area station 95.7 The Game.

"They're not the same personality," Myers said (via NBC Sports Bay Area). "Sometimes, they rub each other in different directions and that's really what happened. And the good thing is that they can, and they did, and they have talked plenty since then. And Draymond made a point of it to talk to [Durant] individually.

"I really think it's behind us. I really do ... you have to flush it out, you have to get it all out there – get all your emotions out. There's a healing part of it – you don't get over it in 30 seconds – but you do get over it. And I honestly think they have."

The Warriors hold a 17-9 record and have won five of their last seven games. Myers said the team could end up being better off because of the clash between Green and Durant.

"When you persevere is when you really form stronger bonds," Myers said. "I think that's all part of the process ... I actually feel good about it. I think they're in a good place."

Green has been dealing with a toe sprain and has not played since November 15.