Solari: I am very happy for Isco 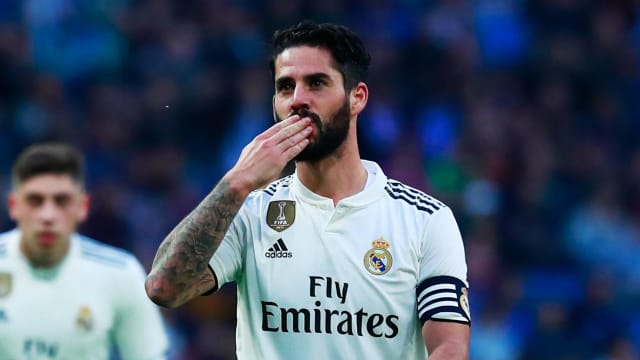 Santiago Solari declared himself pleased with Isco after he was restored to the Real Madrid starting line-up and produced a fine brace in the 6-1 Copa del Rey win over Melilla.

The Spain playmaker has been confined to bench duty since Solari replaced Julen Lopetegui in the hotseat and was dropped from Madrid's matchday squad for last week's 2-0 Champions League victory at Roma.

He returned to the first XI for the formality of Thursday's second-leg tie against third-tier opponents, with Madrid already holding a 4-0 first-leg advantage.

Marco Asensio opened the scoring after the half hour, setting in motion a flurry of three goals in six minutes.

After the interval, Isco joined Asensio in hitting a double – netting either side of Vinicius Junior getting in on the act, with Isco's first a sublime strike from 25 yards that drew warm applause from Solari.

"I'm very happy for Isco, I was very sorry that he missed the one played in the first half, because it would have been a great goal," he told reporters.

"I'm also very happy for Asensio, who scored two goals, and for Vinicius, who did another."

"This game let us see many players who are well and committed," Solari added.

"We have been solid and good in attack. Melilla are very good, the leader of Segunda B.

"I'm happy for what the veterans did, the youngsters of the first-team squad and the homegrown players who debuted.

"I was delighted with the debuts of [Alvaro] Fidalgo, Francisco Garcia and the goal from Javi Sanchez."