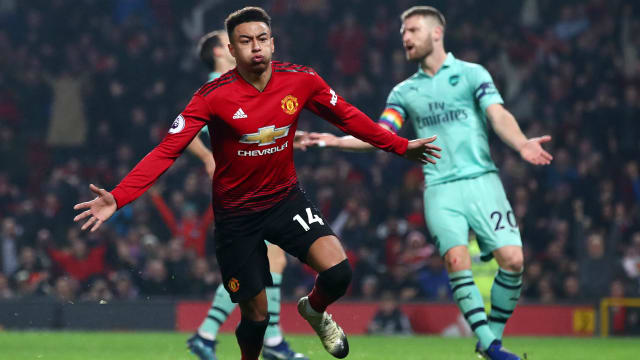 Manchester United twice came from behind against Arsenal in an entertaining 2-2 Premier League draw at Old Trafford on Wednesday.

Anthony Martial, on his 23rd birthday, cancelled out Shkodran Mustafi's opener in the first half following an error from goalkeeper David de Gea.

Alexandre Lacazette capitalised on a Marcos Rojo mistake in the second half only for Jesse Lingard to respond almost immediately, meaning each side had to settle for a draw that does not greatly benefit their top-four ambitions.

Arsenal grew into the game after some early United dominance and went ahead 26 minutes in, when De Gea let Mustafi's header slip through his grasp and Ander Herrera could not clear off the line in time.

United hit back just four minutes later, though. Bernd Leno saved Rojo's free-kick, the ball was turned back towards the six-yard box by Herrera, and Martial swept it high into the net.

The match descended into a scrappier contest, with Arsenal losing Rob Holding and Aaron Ramsey to injury, as both sides seemed to struggle with the torrential rain and slick surface.

And the pitch did United no favours 68 minutes in in a horrible moment for Rojo. Having given the ball away to Lacazette, who exchanged passes with Henrikh Mkhitaryan, the defender raced back only to divert the ball past De Gea with a siding challenge on Arsenal's number nine.

However, the Gunners once more failed to protect their lead, Lingard pouncing on some uncertainty in the visitors' box to slide the ball beneath Leno, 74 seconds after United had fallen behind.

With the game suddenly having come to life, Arsenal wasted two chances to take the lead for the third time, Pierre-Emerick Aubameyang shooting straight at De Gea from point-blank range before Mkhitaryan missed with a near-post touch.

Aubameyang was denied again by a sprawling De Gea and Jose Mourinho threw on Paul Pogba, but neither side could find a winner, with United's goalkeeper making a fine late stop to prevent Lucas Torreira from snatching victory.

102 - David De Gea is the first goalkeeper to save a Pierre-Emerick Aubameyang shot on target in the Premier League since Łukasz Fabiański for West Ham 102 days ago, ending a run of 10 consecutive shots on target scored for the Arsenal striker. Streak.

What does it mean? Gunners slide out of top four

Tottenham's victory over Southampton means Arsenal are now in fifth place, although they are only behind Chelsea on goal difference. Their unbeaten run stands at 20 matches in all competitions.

Mourinho certainly saw some of the spirit and "simplicity" he was looking for from his players and, given their injury problems, he will not be too disappointed to take a point.

However, that eight-point gap to the Champions League spots is unlikely to diminish quickly unless United can beat the teams they are competing against for those coveted places.

United went into the game with serious injury problems in defence, but Eric Bailly, who has struggled for form and fitness this season, starred in the makeshift defence with an accomplished display against Aubameyang.

Rojo's passing from the left was useful and he hit a good free-kick to lead to United's first goal, but his error for Arsenal's second was dreadful and he was perhaps lucky only to be booked for a challenge on Matteo Guendouzi.

United host Fulham on Saturday before they conclude the Champions League group stage in Valencia next week. Arsenal are at home to Huddersfield Town in three days' time, after which Qarabag visit Emirates Stadium next Thursday.