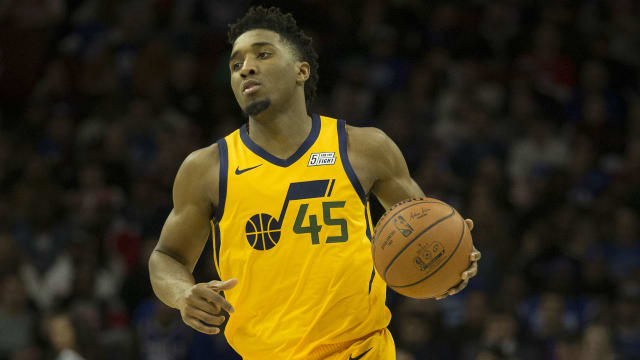 The Utah Jazz were clicking on all cylinders and unexpectedly thrashed the San Antonio Spurs in the NBA on Tuesday.

All five of the Jazz's starters scored in double-digits in their 139-105 victory and, as a team, they shot over 60 per cent from the field. They also hit a franchise record 20 three-pointers in the game. Not many teams can compete with such an efficient shooting performance.

Rudy Gobert recorded a double-double with 18 points and 10 rebounds. Donovan Mitchell led the Jazz in scoring with 20 points.

Jakob Poeltl had a surprising night for San Antonio, scoring a career-high 20 points on nine-of-11 shooting.

The Jazz are trying to slowly edge their way into the playoff picture while the Spurs took a rough loss.

Damian Lillard followed up his 37-point performance against the Spurs on Monday by scoring 33 points against the Mavericks in the Trail Blazers' 111-102 loss.

Aaron Gordon had 20 points and 13 rebounds in the Magic's win over the Heat.

Josh Richardson is leading the Heat in scoring this season but he scored just six points on two-of-14 shooting in his team's 105-90 loss to the Magic on Tuesday.

Everything seemed to be going well for the Jazz in their victory over the Spurs, so it is only right that an incredible Joe Ingles pass ended up in a basket.

Philadelphia (17-8) have won two straight since Jimmy Butler and Ben Simmons donned matching headbands while Toronto (20-5) just dropped a game to Denver on Monday. The 16-7 Nuggets lead the Western Conference, and the Raptors will have to face a fiery Sixers team that is continuing to build chemistry with their new personnel. This game will be Philadelphia's first matchup with a legitimate Eastern Conference contender, so they will see if their newest star can help them defeat the looming beast of the North.