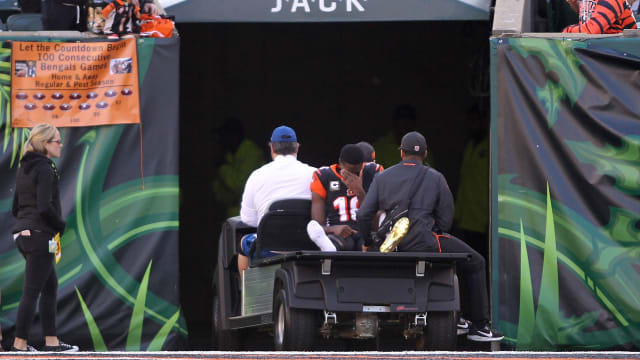 The Cincinnati Bengals have placed A.J. Green on injured reserve because of a nagging toe injury, the team announced on Wednesday.

The wide receiver originally hurt his right big toe against the Tampa Bay Buccaneers on October 28, though he returned to face the Denver Broncos last Sunday.

However, Green aggravated the injury again during his team's 24-10 defeat to Denver, going down in the second quarter without any contact before being carted off the field.

According to ESPN, the 30-year-old - who has registered 46 receptions for 694 yards and six touchdowns this season - will undergo surgery to repair torn ligaments in the toe.

With a spot on the roster available, the Bengals announced they have activated cornerback Davontae Harris from the reserve/injured list.

Harris had been dealing with a knee issue and was placed on the list early in September, eventually returning to practice on November 14.

Harris was placed on the Reserve/Injured list on 9/3 with a knee injury, and returned to practice when the Bengals designated him for return on 11/14. pic.twitter.com/2Jbr74EfYw