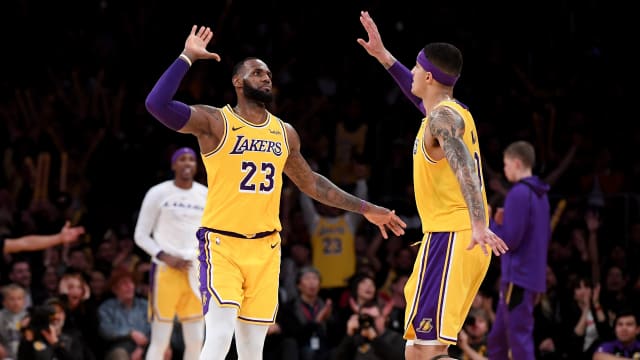 LeBron James talked up the all-round improvements made by Kyle Kuzma and feels their on-court relationship for the Los Angeles Lakers is getting better with each game.

Kuzma has often been noted for his scoring prowess, but has faced scrutiny over the defensive side of his game.

The 23-year-old was influential with and without the ball in Sunday's 120-96 victory over the Phoenix Suns, though, contributing a game-high 23 points, while also adding eight rebounds, three assists and a block.

And James, who put up 22 points in the Lakers' (14-9) third straight NBA win, believes Kuzma is refusing to be typecast as just a player capable of putting up big numbers.

"He's not allowing anybody to put a cap on him and saying he's just a scorer, I think he wants to be more than that," James told reporters.

"His ability to make plays, his ability to rebound as of late, obviously we know how well he can score, but he wants to make more of an impact not just for himself but for the team."

On their relationship, he added: "It started as soon as I signed, he was the first guy to call me off the team.

"It actually started before that, we'd been talking when I was in Cleveland, he wanted to pick my brain, talk about how he could get better.

"We've had that mutual respect and I saw how talented he was playing him twice last year and watching him the late games when I was in the Eastern Conference.

"Our relationship on the floor is getting better and better, if he moves I'm going to find him I'm always looking for him and he knows that."

LeBron James details what went into the Lakers third-straight win at @STAPLESCenterpic.twitter.com/1nvac8gMJf

Kuzma himself spoke about their blossoming partnership, saying: " I texted him early on [last season] after we played Cleveland [Cavaliers] trying to figure out what he does with his body, how he takes care of it.

"I'm inquisitive, I ask questions. He helped me out."

Asked why he has been putting such an emphasis of defense, Kuzma said: "Just because I know that I can do it.

"I think the narrative is I don't play defense but I've been getting better every single game, I want to be a complete player, all great players do it at both ends."