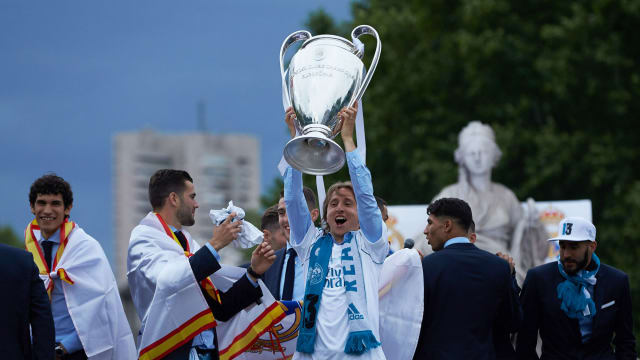 Monday would seem to be a momentous day in modern football: the moment at which the Ballon d'Or escapes the grasp of Lionel Messi and Cristiano Ronaldo.

Since Kaka got his hands on the prize in 2007, Messi and Ronaldo have won five awards each, both during its years as a combined FIFA accolade and as the standalone prize given out by France Football.

However, it is reported that Real Madrid and Croatia star Modric has come first in the voting for the 2018 edition, ahead of holder Ronaldo and Atletico Madrid and France forward Antoine Griezmann.

The triumph would cap a memorable year for Modric, but is he really the most deserving player of football's grandest individual prize? Two Omnisport writers go head-to-head to decide...

France Football are clear that the Ballon d’Or is awarded based on three main criteria: individual and collective performances (prizes) during the year; 'player class' (talent and fair play); and the player's career as a whole.

Apply Occam’s Razor to the 30 candidates, and the solution is simple: Luka Modric is the worthy winner.

In 2018, Modric won the Champions League with Real Madrid for the fourth time in his career. He was the best player for Croatia as he captained them to the World Cup final for the first time ever. He won UEFA's Midfielder of the Season, the World Cup Golden Ball and The Best FIFA Men's Player awards. As collective and individual accolades go, it's difficult to do any better.

His talent is indisputable. He is the beating heart of Madrid and Croatia, a leader in both dressing rooms, a player of such breadth of quality that it’s extraordinary to think he was once told he was too small and slight to be a professional. At the World Cup, he attempted the most passes (484), had the most touches (624) and most recoveries (56) of any midfielder. As for fair play, he was booked six times in 56 appearances for club and country this year, and never sent off. In fact, he only has one red card in his whole senior career.

And what about that career? Four league titles, six domestic cups, four Champions Leagues, six global club titles, four FIFA FIFPro World XI nominations, four times part of the Champions League Team of the Season, and the best player at the Club World Cup and World Cup in the last 12 months. And that’s ignoring the rest of his accolades this year.

At the age of 33, Modric has almost nothing else to prove, nothing left to achieve, and nothing more to win in professional football – except the Ballon d’Or. That tells you how much he deserves it.

No – Sorry to be boring, but Messi is still the best of the best
By Dom Farrell

Luka Modric is a sublime footballer, one of the finest midfielders of his generation and almost always an absolute delight to watch. He deserves due credit for his pivotal role in Real Madrid's trio of Champions League triumphs – irrespective of what Cristiano Ronaldo's sister might say – and seeing him lead a gifted Croatian generation towards a full realisation of their talents at the World Cup was one of this year's feelgood sporting stories.

However, I'm going to have to play Grinch at this festive time of year because he has not been the best player in the world over the past 12 months. That is a distinction very few have realistically been able to claim in this era, because they exist at the same time as Lionel Messi. Change always feels good and Modric making a compelling argument to end the Messi-Ronaldo duopoly is attractive.

This factor, alongside Messi's habit of making the extraordinary feel normal and something we should expect to see most weeks, has done for the mercurial Argentinian as he prepares to miss out on the top three altogether.

Leo #Messi
A  for football pic.twitter.com/n5R9gO3CfH

In 2018, Messi inspired Barcelona to another LaLiga and Copa del Rey double. A treble-completing Champions League proved beyond them but he has 41 goals and 20 assists across 45 appearances for the Blaugrana this calendar year. His 61 goal involvements outstrip anyone else in Europe's top five leagues over the same period.

The idea that him failing to drag an incomprehensible rabble of an Argentina team to World Cup glory should be a stain on his reputation is far-fetched. Instead, just look at the perfect combination of touch, technique and poise that saw him score an incredible goal to give his nation forlorn hope in their sole Russia 2018 win over Nigeria. That, right there, is still the best player in the world.