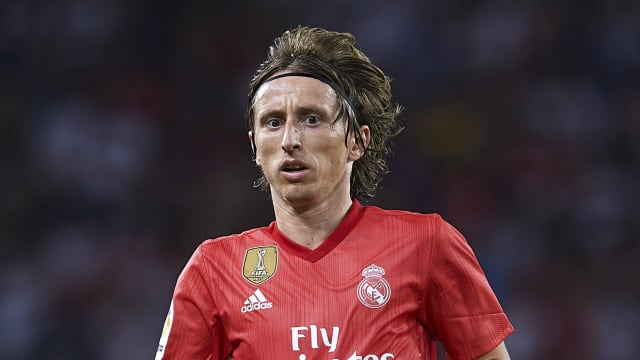 Luka Modric has been crowned the Ballon d'Or winner for 2018, beating Cristiano Ronaldo and Antoine Griezmann to claim the prize on Monday.

The Croatia midfielder was the star of the show in his country's run to a first ever World Cup final this year, while he played a major role in Real Madrid winning a third consecutive Champions League crown.

Modric's win ends a decade of dominance for Ronaldo and Lionel Messi, who had won the Ballon d'Or five times each over the past 10 years.

Omnisport takes a look at the Opta numbers for 2018 to see how each of Griezmann, Ronaldo and Modric made it into the top three for the Ballon d'Or.

- Atletico Madrid's Europa League hero Griezmann was the first player to score both in the World Cup final and a major European final in the same year since Jorge Valdano did so for Argentina (World Cup final) and Barcelona (UEFA Cup final) in 1986.

- No player was involved in more goals at the 2018 World Cup than Griezmann, who recorded four goals and two assists - level with Harry Kane, who scored six goals as England captain.

- Though there is still a month of 2018 remaining, Griezmann has already equalled his best year of domestic top-flight football in terms of goal involvements - he has been involved in 28 league goals so far in 2018 (17 goals, 11 assists) which equals his best year in 2015 (25 goals, three assists).

1 - Antoine Griezmann became the first World Cup winner to be involved in at least one goal in the Last 16 (one goal), the quarter-final (one goal, one assist), the semi-final (one assist) & the final (one goal) in a single edition of the tournament since 1986. Prince. #ballondorpic.twitter.com/9eGFKvO1gY

- Ronaldo has scored 45 goals in just 47 games for club and country in 2018. He has been involved in a goal every 70 minutes on average so far this year in all competitions for Portugal, Real Madrid and Juventus combined.

- In April 2018, Ronaldo broke the record for scoring in the most consecutive Champions League appearances after he found the net in 11 matches in a row. The run started with the 2017 final against Juventus and ended with a penalty against the same opponents in this season's quarter-final second leg.

- Modric completed the most passes (422) and created the most goalscoring chances (18) for Croatia in their 2018 World Cup campaign, which ended in a 4-2 loss to France in the final.

- In fact, during the World Cup, Modric was the midfielder with the most passes attempted (484), most touches (624) and most recoveries (56).

- Modric also won the World Cup's Golden Ball award for the tournament's best player, becoming the first player from Croatia to take the prize. Modric was also the first Croatian to place in the top three since Davor Suker finished second in 1998.

Dreams come true. Family, Croatia, Real Madrid... everyone who helped or supported me to be here today. This is also yours.