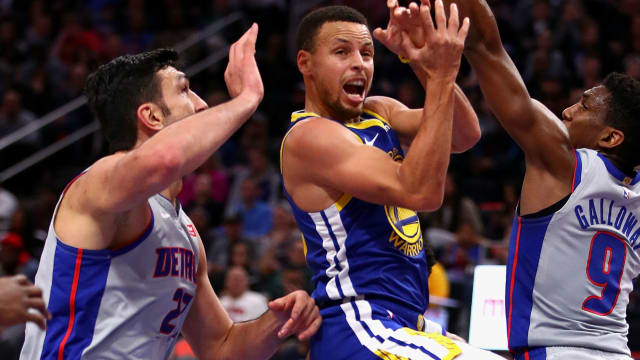 Stephen Curry is back, but his return was spoiled as the Golden State Warriors fell to the Detroit Pistons 111-102 in the NBA on Saturday.

The two-time MVP, who missed the last 11 games as he recovered from a strained groin, failed to connect on his first three shots – all three-pointers – but then drove to the basket for an old fashioned three-point play on the first possession of the second quarter.

But, that did not stop a streaking Detroit team.

At one point in the second quarter, the Pistons led by as many as 11 points and they entered half-time with a 54-46 advantage.

Detroit big man Blake Griffin finished with a team-high 26 points. Andre Drummond added a double-double with 16 points and 19 rebounds while Stanley Johnson had 13 points off the bench in the Pistons' fifth consecutive win.

Curry finished with 27 points in 37 minutes on 10-of-21 shooting. He knocked down three of his nine three-point attempts.

Golden State coach Steve Kerr said he could have done a better job handling the team's rotations with Curry back on the court.

"I did not like our offense. I've got to do a better job," Kerr told reporters after the loss (via The Mercury News). "Tonight was probably a game that I can mark down as one of my worst performances as a coach, honestly ... We had some combinations out there that we hadn't planned on going to that clearly were not effective, and that's my fault."

Knicks forward Kevin Knox scored a career-high 26 points, including five three-pointers, off the bench as New York outlasted the Bucks in overtime 136-134.

John Wall poured in 30 points in the Wizards' win over the Nets. He also finished with nine assists.

Kawhi Leonard helped the Raptors continue their hot start. He scored 34 points in Toronto's 106-95 victory over the Cavaliers.

While Wall had a hot night for the Wizards, D'Angelo Russell struggled to get things going for the Nets. He scored just eight points in the 102-88 loss and was minus-20 when he was on the court.

Damyean Dotson made a 26-foot three-pointer to put the Knicks up for good.

38.5 to play in OT on #NBA League Pass: https://t.co/L3VurkatG8pic.twitter.com/vMSZzQsuYx

Gordon Hayward scored a season-high 30 points in the Celtics' 118-109 win and knocked down four of his five shots from long distance.

The Clippers (15-6) moved atop the Western Conference on the heels of a four-game winning streak. Los Angeles will now have to face Dallas (10-10) on Sunday. The Mavericks have won seven of nine and their last six games at the American Airlines Center.