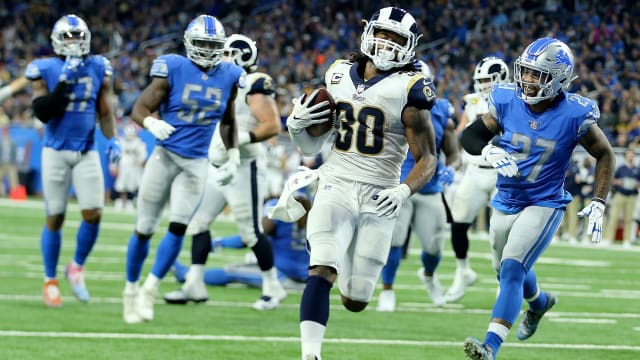 The Los Angeles Rams became the first team to clinch a playoff berth in the NFL after winning the NFC West title for the second consecutive year.

Los Angeles powered to a 30-16 victory over the Detroit Lions on Sunday at Ford Field.

"What better way to get it done, winning the division, with a complete team effort," coach Sean McVay said in the locker room after the game.

And he certainly was not wrong. Los Angeles attacked Detroit on every front.

Offensively, quarterback Jared Goff finished 17-of-33 passing for 207 yards with one touchdown and one interception. He looked to running back Todd Gurley II to help carry a bulk of the load. Gurley had 132 yards and two touchdowns on 23 carries. Both rushing scores came in the fourth quarter to bolster the Rams' lead.

Defensively, the Rams picked off Matthew Stafford and were efficient on third down, where the Lions only converted two of 12 tries. Safety John Johnson III led the defensive efforts with 11 total tackles, but it was defensive tackle Aaron Donald that brought the pressure right to Stafford. He finished with five tackles and two sacks.

Now at 11-1, the Rams will hope to clinch the NFC's top playoff seed and a wild-card weekend bye. In the last four weeks of the season, the streaking Los Angeles will face just one opponent with a winning record – the Chicago Bears.

Bengals wide receiver A.J. Green was carted off the field in the first half of Sunday's game against the Broncos after going down with a non-contact right foot injury. He was later ruled out for the remainder of the game.

Denver cornerback Chris Harris was also carted off the field with a lower leg injury and later ruled out. Harris is believed to have suffered a broken fibula, which might not require surgery but could keep him sidelined for four weeks.

Rams running back Malcolm Brown was ruled out after suffering a shoulder injury.

Packers offensive tackle Bryan Bulaga suffered a knee injury against the Cardinals. He was ruled out for the rest of the game.

Panthers tight end Greg Olsen suffered another foot injury on a non-contact play in the second quarter against the Buccaneers, and after the game announced he would miss the rest of the season.

Falcons linebacker Foye Oluokun exited with a knee injury against the Ravens.

Houston cornerback Johnathan Joseph left the game against Cleveland with a neck injury. The NFL Network later reported Joseph suffered a stinger, citing an unidentified league source, but that he is expected to be back for next week's game against the Colts.

Saquon Barkley is still breaking records, moving past Hall of Famer Tuffy Leemans (830) for the most rush yards by a Giants rookie in team history.

Odell Beckham Jr. has impressed as a thrower for the Giants this season, going two of two for 105 yards and two touchdowns with a 158.3 QB rating. He also became the first player in over nine decades to have multiple games in a single season with both a passing and receiving score.

.@OBJ JUST THREW HIS 2ND TD PASS OF THE YEAR!

Tom Brady, the rusher? The Patriots quarterback now has 1,000 career rushing yards. The feat took him 265 games to accomplish, the most by a player since 1970. He also became the oldest player to reach that milestone since 1970.

The Cardinals won in Green Bay for the first time since 1949.

Panthers quarterback Cam Newton was not happy with his performance. He threw four interceptions in Carolina's 24-17 loss to Tampa Bay: "This wasn't Carolina Panther football. I take this one personal. [We] keep running off the field in embarrassment. We have to find ways to get back in the win column."

The Jaguars did not need to score much to top the Colts as two field goals did the trick in Jacksonville's 6-0 win. Indianapolis coach Frank Reich gave the Jaguars credit where credit was due: "We were down in there enough, and that's why you have to make every play count. They deserve a lot of credit for stopping us. Not every game is going to be running up and down the field, especially when you play a defense like that in their home stadium."