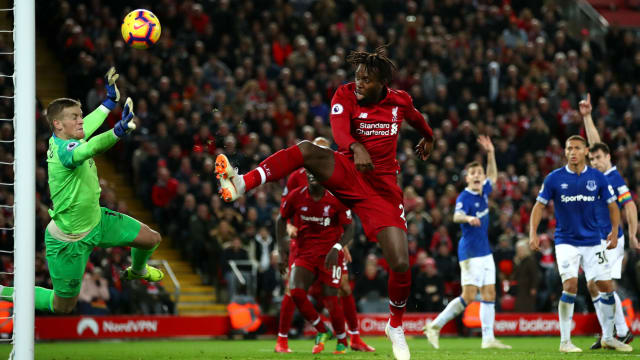 Everton had produced an admirable performance and could have ended their infamous Anfield hoodoo had they taken one of their numerous first-half chances, but just as it looked as if they had done enough for a point, Liverpool snatched all three in stunning circumstances.

Alisson, who had earlier brilliantly denied Andre Gomes, cleared a free-kick as far as Virgil van Dijk, whose skewed long-range effort appeared to be heading for the top of the crossbar, only for Pickford to inexplicably palm it back into the air, the ball then bouncing off the bar and into the path of Origi, who had the simple task of nodding into an empty net.

It means Liverpool – whose manager Jurgen Klopp sprinted onto the pitch to celebrate – stay within touching distance of champions Manchester City, who they trail by just two points, with the Reds continuing to look like the most likely challengers to Pep Guardiola's side.