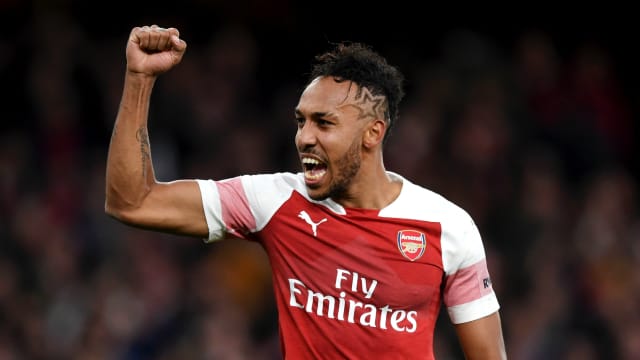 Ramsey was inspirational off the bench as Aubameyang's double helped Arsenal to a 4-2 north London derby win over rivals Tottenham in the Premier League on Sunday.

Wales midfielder Ramsey teed up Aubameyang for a fine finish that made it 2-2 before Alexandre Lacazette and Lucas Torreira struck for the Gunners at Emirates Stadium.

And Ramsey had high praise for Aubameyang, who is the top goalscorer in the Premier League this season, after Arsenal leapfrogged Spurs to move into the top four.

"It was unbelievable but he does that in training all the time," said Ramsey. "He just eases the ball into the corners but with pace as well.

"It reminds me of Thierry Henry's finishes, so he has that in the locker. He's been fabulous for us.

"I think that was important for us to score that goal. Then you could really feel that the atmosphere was electric. That really helped us to get over the line and win convincingly in the end.

"I've been here now for many, many years so it means an awful lot to me and the fans as well. I'm just glad I could play my part and we can all go home happy tonight.

"I think a lot of our subs this season have come on and made an impact. It was important again today. We started well in the first half, we then had a little stutter but we dug in and in the second half we won pretty convincingly."

Ramsey is expected to conclude a 10-year stay at Arsenal at the end of the season, the club having withdrawn their offer to extend a contract that expires in 2019, but head coach Unai Emery feels Ramsey still has a part to play.

"When thinking about the first 11, Aaron has chances to help us, starting the match or in the second half," Emery told a post-match news conference.

"Above all today, it can be his day because it's Tottenham and he has experience.

"We want to continue with him our process, helping him to be with us with his performance and quality."