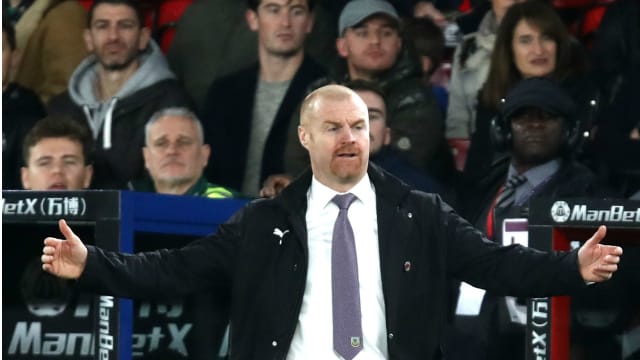 Sean Dyche believes that Burnley have lost the mentality that saw them finish seventh in the Premier League last term, after they were beaten 2-0 by Crystal Palace.

Burnley sit 18th in the top flight, and are now without a win in seven games, with goals from James McArthur and Andros Townsend doing the damage at Selhurst Park.

And Dyche acknowledged that, although he cannot question his side's effort, Burnley lack cohesion and focus to their play, and used a boxing analogy to describe the Clarets' troubles.

"The best side won, simple as that. We are in the position where the eye of the tiger has gone, last season everyone was on it," he said.

"To get the eye of the tiger back, a boxer has to get back in the gym. We need to get the gloves on and start fighting.

"We've got to get back on the training ground and work hard. There's a lot to compute, but it's our job to help the players' change the mentality."

"It's frustrating, they have given so much to the cause but then fear comes in, it's a tough thing.  It plays tricks with you, and players get stretched as individuals.

Palace were on top throughout, although it took a large slice of luck for the hosts to take the lead when McArthur's cross found its way into the net.

Wilfried Zaha forced a number of fine saves out of Joe Hart before hitting the woodwork, but it was not until the 77th minute that Townsend's sublime strike put Palace out of sight.

4 - Crystal Palace’s Andros Townsend has scored and assisted in the same Premier League game for only the fourth time and the first since December 2017 (for Palace against Arsenal). Rocket.

Palace have now ended an eight-match winless run, as well as clinching their first home league win of the season, and Townsend says that Saturday's result can act as a launchpad for the rest of the campaign.

"Maybe we've been guilty of not putting the chances away, which was the story today, but thankfully we did get two to get us over the line and get three points.

"Hopefully now we can have the confidence and can build to start putting away the chances that we are creating.

"We got the goal in the first half and it was a bit edgy in the second half, missed a few chances, and we've seen the script before when we've dominated and missed chances and they've hit one on the counter-attack.

"So to score and finish off the game, I'm happy with, and the three points is the most important thing."