Maddison says 'I had to make amends' after inspiring Leicester victory 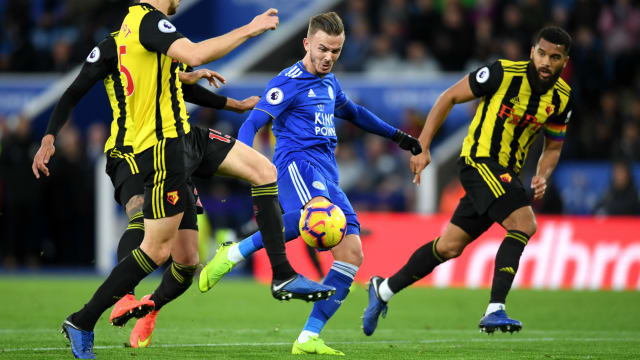 Leicester City star James Maddison felt like he had to make amends for his sending off last week before his stunning strike helped to see off Watford.

Jamie Vardy's penalty and Maddison's magnificent volley, which capped a trademark Leicester counter-attack, had the hosts 2-0 up inside 23 minutes on Saturday, and there were no further goals in the match.

The attacking midfielder was sent off in the 1-1 draw against Brighton and Hove Albion last week and was only able to face Watford due to serving his suspension in the rearranged EFL Cup tie against Southampton.

Maddison pointed to the heavens after his goal, dedicating it to former club owner Vichai Srivaddhanaprabha, and felt he had to repay his team-mates after receiving two bookings in two first-half minutes - the second for diving - last time out.

"I made a mistake and I held my hands up last week," the 22-year-old said to Sky Sports.

"I just wanted to make sure that whatever happened I worked harder than anyone else. I think I showed that and obviously the bit of quality helped with the goal."

He added to BBC Sport: "That goal was right up there especially after a disappointing week last week. I knew the best way to bounce back was to get a goal. It was a good team goal, a counter-attack and luckily I had the quality to tuck it away so I am really happy with that one.

"I needed to make an impact to make amends and thankfully I did that and hopefully that is in the past now.

"I pointed to the heavens for Khun Vichai - he came into the changing room before the tragedy and said, 'My number 10, you are due a goal'. That one was for him.

"We had a lightning start. When you have a striker like Jamie Vardy who is rapid and can run in behind and cause any defence problems – he did that in the first 15 minutes. Five [unbeaten] yeah? We're on a bit of a roll aren't we?"

Manager Claude Puel added: "He [Maddison] was very upset with himself [for the red card] and wanted to make a strong game with quality to give to his team-mates a good performance as well."

Khun Top is here at King Power Stadium for #LeiWatpic.twitter.com/IBzBveSkSh

To make matters worse for Watford, who have now only collected one point from their last four games, Etienne Capoue was sent off in the last minute for a two-footed challenge on Kelechi Iheanacho, a decision the visitors disagreed with.

Striker Isaac Success said: "I feel sorry for my friend Etienne because he has been one of the best players and I don't think it was a red card. I spoke to Iheanacho and he said there was no contact by Capoue.

"It was right in front of me and there was no contact. We will see what the FA will do about it because it was never a red card and we need him back as soon as we can."

Watford boss Javi Gracia sounded hopeful over an appeal against the red card, adding: "I could see better for the Capoue red card and it is important the other player, Iheanacho, said he didn't touch him then maybe we can find a solution.

"I prefer to keep my opinion [to myself] because in the last games we have been unlucky with these decisions."