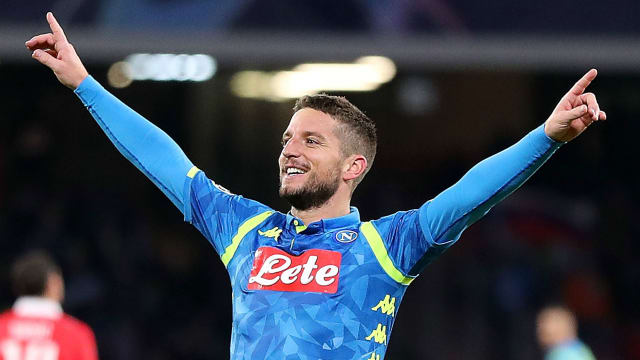 Napoli put one foot in the knockout stage of the Champions League by beating Red Star Belgrade 3-1 to go top of a tightly balanced Group C with one game left to play.

Marek Hamsik's first goal of the season put Carlo Ancelotti's free-flowing side on their way after 11 minutes, and Dries Mertens bagged a brace either side of half-time to put the game beyond Red Star.

El Fardou Ben pulled one back but Vladan Milojevic's men can no longer progress in the competition after taking just four points from their five games, while Napoli need just a point in their final game against Liverpool to make certain of their progression.

That point will not come easy at Anfield but Ancelotti will be confident after seeing the Partenopei extend their unbeaten run to 10 matches in all competitions with a fluent display of passing football and clinical finishing.

Napoli's attack found its rhythm quickly and Mertens went close with an audacious behind-the-leg shot before Hamsik connected with Nikola Maksimovic's flick-on at a corner to score with a side-footed volley from point-blank range.

Veljko Simic should have done better when Marko Marin put him through after 22 minutes but David Ospina made a simple low save and the Red Star winger was made to rue his missed opportunity when Mertens beat Milan Borjan at his near post, guiding Fabian Ruiz's deflected cross home with the outside of his right boot.

The second half was seven minutes old when Hamsik's chipped ball forward found Mertens, who controlled it immaculately before curling the ball towards goal with so much power that it went through Borjan's hands and into the top left corner of the net.

Ben's consolation strike was all about Marin, who twisted and turned his way through Napoli's defence to tee up a simple low finish for the Comorian striker, before Napoli weathered a late spell of possession for the visitors as all three points stayed at the San Paolo.

What does it mean? Group C goes to the wire

Paris Saint-Germain are one point behind Ancelotti's Group C leaders, while Liverpool trail Napoli by three points, meaning any two of those three sides could yet clinch a place in the last 16.

Compared to the likes of Paolo Maldini by his coach ahead of the game, Kalidou Koulibaly lived up to his billing with an imperious display of defending and some dangerous forays into Red Star territory.

It cannot be easy to stand out in a side as strong as Napoli's, but Lorenzo Insigne was decidedly quiet on a night when his team-mates were full of the invention and craft that he usually relishes.

Napoli will seek to extend their unbeaten run when they head to Atalanta in Serie A on Monday, while Red Star will hope to strengthen their grip on the Serbian Super Liga when they entertain Vozdovac on Sunday.