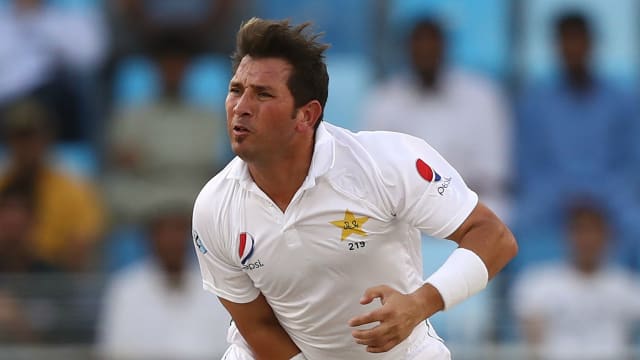 Yasir Shah took 10 wickets on day three of the second Test in a sensational display as New Zealand spectacularly crumbled against Pakistan.

Sarfraz Ahmed's decision to declare on 418-5 a day previously initially appeared an odd one, especially when the tourists made serene progress to 50-0 in Monday's morning session in Dubai.

But Jeet Raval's unlucky dismissal to Yasir for 31 sparked a monumental first-innings collapse with 10 wickets falling for just 40 runs as the Black Caps were bundled out for 90, their lowest total under Kane Williamson's captaincy.

The highlight of Yasir's exquisite spell came with a triple-wicket maiden in which Tom Latham (22), Ross Taylor and Henry Nicholls all fell as the leg-spinner finished with first-innings figures of 8-41 – the third best in Pakistan history.

New Zealand equalled the record for most ducks in an innings with six, and Yasir snared a couple more victims after Williamson's men were forced to follow on before they finally showed some resistance to reach 131-2 at stumps.

Raval was unfortunate to see the ball deflect off his thigh and the back of his bat before striking his stumps, but Latham succumbed to Yasir's turn and bounce to pop one to short leg.

An unplayable beauty from Yasir turned past Taylor's outside edge and crashed into the stumps, before Nicholls was sent hastily back in similar fashion.

BJ Watling (1) was run out via an unfortunate ricochet off Yasir, although the decision to call for a run was a poor one, and Colin de Grandhomme was trapped lbw by Hasan Ali without scoring.

Williamson (28 not out) could do little about the carnage at the other end as numbers four to 11 added just five runs, Yasir sweeping up the remaining four wickets in the space of only nine balls.

A repeat appeared on the cards when New Zealand were inevitably put back into bat, with Raval (2) drawn forward by Yasir and stumped by Sarfraz, who also took the catch to claim the big wicket of Williamson (30) after a review.

Latham (44no) and Taylor (49no) were unbeaten in a stand of 65 by the close of play, with New Zealand - who won the first Test in the three-match series thanks to a similarly dramatic Pakistan collapse - still 197 runs in arrears.