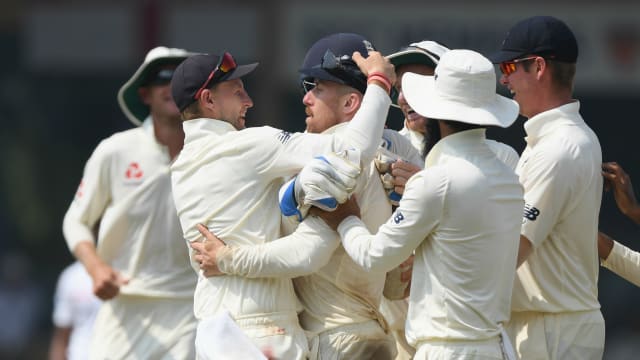 Joe Root says everyone in the England team "stepped up" during the 3-0 Test-series whitewash in Sri Lanka.

The tourists completed a 42-run victory in Colombo on Monday to seal their first ever sweep in Sri Lanka, Jack Leach breaking a century sixth-wicket stand between Kusal Mendis and Roshen Silva with a brilliant run out to end the hosts' brief hopes of a revival.

Before the trip, England had not won an away series since the 2015-16 tour of South Africa and Root, who had overseen defeats in Australia and New Zealand in his previous two tours as captain, hailed the collective team effort in getting that monkey off their back.

"I'm proud of everyone, it's been a brilliant tour and a real team effort," he said at the post-match presentation.

"We knew we were capable but to perform as consistently as we have shows a real learning in the squad.

"A big secret of our success has been being able to pick a team to take 20 wickets and score enough runs on every ground.

"You're only as good as your team, the guys have stepped up, either passing it on to the young guys or coming in themselves. It's been a complete team effort."

England toiled throughout the morning, taking just one wicket before Leach's run out of Kusal turned the momentum back in their favour.

"I was just trying to get my body going again, as I was keen to get that new ball in my hand," Leach told Sky Sports.

"I'd love to say I've been working on them [run outs]. It was a big moment, I saw it going towards the stumps and thought, 'that's going to hit.'"

"I expected a strong, tough game," he said. "It was the small things that went wrong. In the future we hope to rectify that. Everybody did their best."