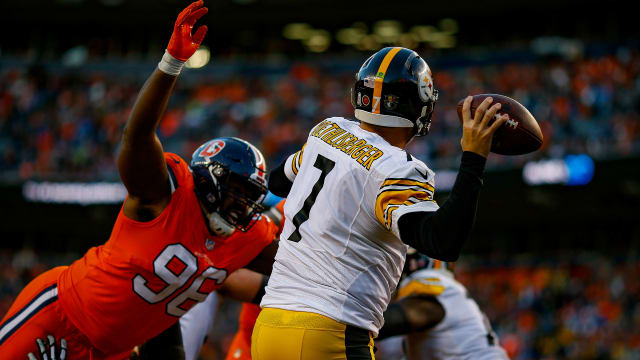 The Pittsburgh Steelers' winning streak is over after a 24-17 loss to the Denver Broncos in the NFL on Sunday.

The Broncos took a touchdown lead on the first play of the fourth quarter when Phillip Lindsay punched it in from nine yards out.

Steelers quarterback Ben Roethlisberger, however, strung together a nine-play, 54-yard drive to move his team into position to tie the score in the final minutes.

But, Broncos lineman Shelby Harris picked off Roethlisberger in the end zone with one minute, seven seconds to play to seal the win.

Pittsburgh executed a perfect fake field goal and evened the score at 10-10 just before half-time. Kicker Chris Boswell received a direct snap and found lineman Alejandro Villanueva in the end zone for the score.

(Yes, you read that correctly.) pic.twitter.com/0FtvWfCkCO

Lindsay finished the game with 110 yards on the ground and the score. Denver quarterback Case Keenum was 15-of-28 passing for 197 yards and two touchdowns.

Roethlisberger threw for 462 yards and a score for the Steelers. But, he was picked off twice and sacked two times.

The loss dropped the Steelers to 7-3-1 this season while the Broncos moved to 5-6.