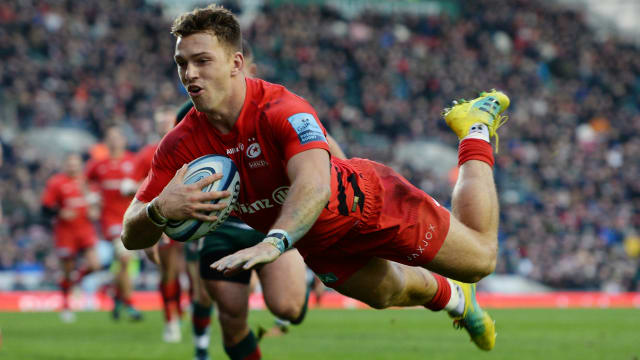 Saracens held off a second-half fightback from Leicester Tigers to win a Premiership thriller 27-22 at Welford Road on Sunday.

The visitors boasted a comfortable lead at the interval thanks to scores from Ben Spencer, Alex Lewington and Alex Lozowski.

However, Brendon O'Connor crossed early in the second half for a Tigers side depleted by international call-ups and the same man crashed over again after Ben Earl and Schalk Burger were sent to the sin-bin.

Matt Smith scored Leicester's third try, but the extras were missed and Sarries – who are second on points difference – held firm for an eighth win from as many league matches this season.

Saracens, seeking to maintain their 100 per cent record in the league, led 21-3 at the break thanks to three tries of the highest quality.

Spencer started the scoring with a stunning sprint from inside his own half after returning a Leicester kick over the top before Max Malins led a brilliant break and played a phenomenal pass for Lewington to cross.

Lozowski then showed delightful feet on the right touchline and blistering pace to evade the Leicester defenders.

O'Connor got the hosts back in the game from a rolling maul early in the second half and when Earl was pinged for deliberate knock-on and Burger also shown a yellow card Sarries were down to 13.

The Tigers quickly took advantage of the extra numbers with O'Connor driving over again and Smith racing onto a brilliant Gareth Owen grubber to bring the score within two points.

But clever work from the forwards helped wind down the clock and saw Sarries earn a penalty, which Spencer nailed, and with their full numbers back in play they overturned Leicester ball on the final play to celebrate another win.