It's my job to get Ireland fans back onside - McCarthy 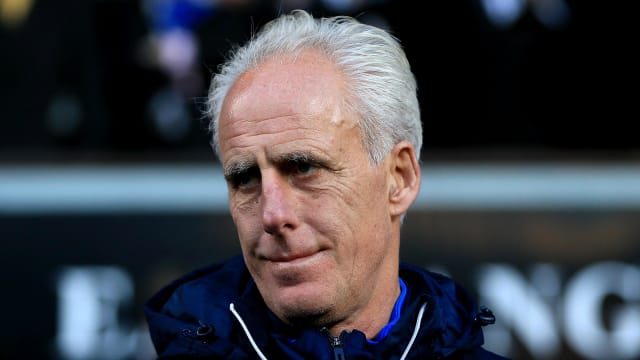 Mick McCarthy took responsibility for winning over Republic of Ireland supporters at his first news conference after being appointed the national team's manager for the second time.

The 59-year-old described himself as older and wiser than when he first took the job in 1996, and also said he tends "not to fall out with people as quickly", making reference to his infamous spat with Roy Keane at the 2002 World Cup.

McCarthy, who will be replaced by Stephen Kenny after the Euro 2020 finals, said he hoped to bring the atmosphere he experienced as a player and a manager at Lansdowne Road to Ireland's Aviva Stadium.

"It has always been such a wonderful experience as a player and as a manager it was the same," McCarthy told reporters.

"We made Lansdowne Road an intimidating place. We did have it rocking. It's my job to get the fans back onside. I hope it's a good thing that I've taken over. I'm older, wiser, I've lost some hair, and I tend not to fall out with people as quickly as I did before.

"I've realised you lot [journalists] have a job to do. I've won the league twice, been in the Premier League for three or four seasons. I think I've learned something."

Mick McCarthy: I have spoken to Declan Rice's father. We had a good conversation. I am going to go and speak with them both in December. #COYBIGpic.twitter.com/MWXQLWEk45

When asked about the prospect of West Ham's Declan Rice featuring in his side, McCarthy said he was in discussions with the 19-year-old's father.

Rice missed Ireland's recent games against Northern Ireland and Denmark, and McCarthy confirmed that England manager Gareth Southgate had approached the defensive midfielder to try and persuade him to play for the Three Lions.

"I spoke to Declan's father and had a good conversation with him," said McCarthy. "There is a misconception that Declan wasn't here for the games because he had a fallout with Roy [Keane] or [predecessor] Martin [O'Neill] - he's got upmost respect for both those guys.

"He was asked by Southgate to go and see St George's Park and see if he'd like to play for them. He didn't say he wanted to or didn't want to. He found it overwhelming. I said he should get back in the West Ham team, which he has done, and I'm going to go and speak to him and his father in December."

McCarthy tipped his assistant Robbie Keane for a bright future in coaching, and described his request to work underneath him as "cheeky".

Keane will be joined by Terry Connor on McCarthy's staff and the new manager said young players would look up to the former Tottenham and LA Galaxy striker.

"I'm coming up for 60, TC is 56, but I like the idea of a young coach with bright ideas," said McCarthy. "He is one of the most capped Ireland players and the top scorer. He'll have a real affinity with the young players - he's their hero.

"It was suggested to me by Robbie. At first I thought you cheeky b******! He is cheeky, he was a cheeky player. I gave him his debut at 18 but there's more to him now.

"He always loved his football but he's got his head screwed on in terms of wanting to be a coach or manager in his own right. He should be part of the succession here because he's got a lot to offer."